Depth of Field refers to the part of the image that is in focus. A deep DOF allows both the foreground and background to appear in focus, while a shallow DOF will only allow focus on a single area or subject. Let's see what Vincent and Blake have to say about it in the video below!

F-stop
Describes the size of the aperture opening. The lower the f-stop number, the bigger the aperture and the more light is able to reach the image sensor.
A low f-stop (large aperture) results in a shallow DOF. A high f-stop (smaller aperture) gives a deep DOF. To dive into this further, take a look at our lesson on f-stop and aperture here.

Shallow vs. Deep
Shallow depth of field means that a subject is in focus but objects in front and behind it appear out of focus. Less DOF is often desired when shooting portrait, close-up and macro shots. 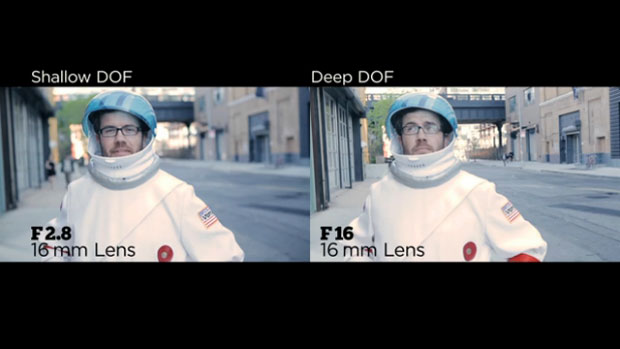 Deep depth of field means that all or most of the picture is in focus from front to back. It is often used for capturing subjects in the distance. This is also preferable for documentary work, as you don't know how the subject will move and it is easier to pull focus.

Now Get Playful!
We've given you a handy overview of the different lenses available, a breakdown of what focal length is, and finally, a peek into the wonders of DOF. Now we implore you to experiment with this newfound brain food. Utilize the functions of your lens for increased dramatic effect and to better tell your story! Remember kids: your lens is your friend.

Up next in Shooting & Gear

The basics of image resolution

From standard definition to HDR there's a ton to know about image resolution. Let us take you on a pixel tour.

Claiming your free DJI Osmo Action by signing up for Vimeo premium? Here are some tips for putting it to use.

For a limited time, we're giving away the DJI Osmo Action cam to new Premium subscribers. We took it for a spin, a whirl, and then some — here's our review.