It doesn’t matter if you’re shooting a wordy rom-com, a vérité documentary, or your grandmother’s wedding: getting high-quality, audible sound is always necessary.

With this in mind, finding the right microphone (at the right price) is as imperative as finding the perfect camera, lights, or breakfast burrito supplier for your next film shoot.

In order to choose the right microphone, you first need to know what kind of sound you’ll be recording, in what environment, and from what distance. For example, is there dialogue in most of your scenes? Are you shooting from close-up or a large distance? Do the scenes take place outside or in noisy locations? 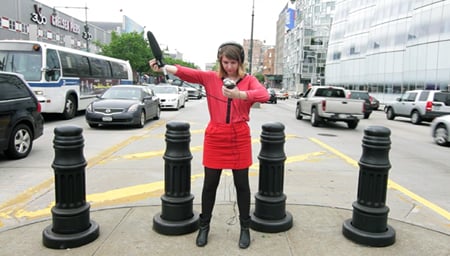 #protip: it’s usually best to avoid shooting conversation on city streets at rush hour, in malls on Saturdays, and factories where lawn mowers are made.

With this in mind, if you’re planning on renting or buying microphones and sound equipment for a specific project, don’t make any decisions until the script, shot list, and/or shooting style have been decided upon!

How to choose your mic: three favorites explained 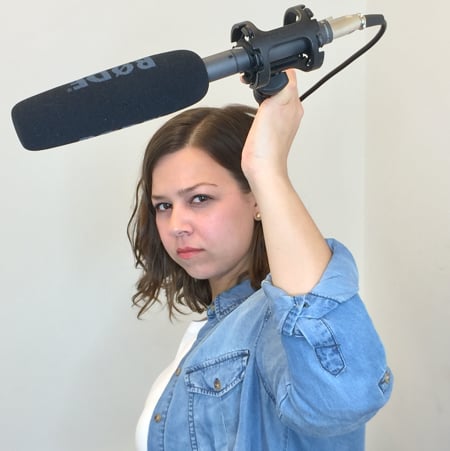 A boom mic is one of most recognizable pieces of equipment, and while holding one for hours at a time may require some patience and killer biceps, they’re relatively easy to use.

Not suitable for: super-wide shots, single-person shoots, shoots without a designated mic operator.

If you’re a fiercely independent filmmaker who likes to shoot alone, or you’ve simply been slugged with shooting your cousin’s Bar Mitzvah because you’re the only one who can work the camera, then a boom won’t be suitable for you. While many boom mics can also be mounted directly on a camera, booms are most effective when you have a sturdy someone to hold the mic (mounted on the end of a boom pole), either above or below the speakers just out of frame.

Additionally, if you’re going to shoot scenes a significant distance away from your actors, then your boom operator won’t be able to get the mic close enough to capture the dialogue clearly. In these cases, a lavalier mic is your best bet (and those bad boys are explained below!).

Price range: You can swing a serviceable mic, along with all the necessary equipment (such as the pole, attachments, microphone sock, connector plugs, and cable) for as low as $60. On the other end of the scale, you can pick up a state-of-the-art model for a cool $999.

Cheaper boom mics are absolutely going to get the job done and capture your dialogue better than a built-in camera mic. However, the sound captured in pricier models will be sharper, and shouldn’t be affected by wind and humidity the way less expensive models often are. 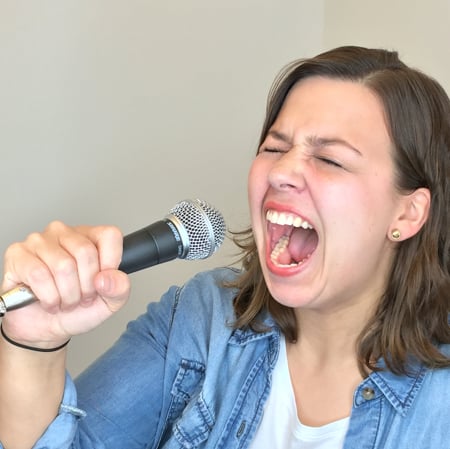 A handheld microphone is probably what comes to mind when most folks hear the word ‘microphone.’ But they’re not necessarily the most common mic on a set. This is because handheld mics are, as their name states, held in your hand, and this comes along with both pros and cons.

Handheld mics are speaker-operated (meaning, the person speaking is usually holding their own mic). The speaker can freely move the mic without a boom operator trying desperately to keep up — but it also means the person controlling the mic might not know how best to utilize it, since they may not be a sound expert themselves.

If you’re wary of the latter, then it’s best to mount the handheld on a microphone stand and let your sound expert or gaffer mark where the speaker should place their feet.

Handheld microphones essentially take narrative film off the table. Unless you plan on challenging your audience’s perception of reality, having your actors hold microphones to their mouths as they deliver dialogue is going to look pretty terrible.

The same can be said for instructional and exercise videos where the host needs access to both their hands; a boom or lavalier mic would totally do the trick!

Additionally, because handheld microphones capture a wider dome of sound than a boom (and certainly more than lavalier), they’re more likely to capture surrounding environmental sounds. So, if you’re shooting on a windy tundra or at a blustery beach, then a lavalier mic would be a much wiser choice.

Price range: There’s a huge variety of handheld microphones available, and, unlike boom and lavalier mics, they’re often available at general appliance, electrical, and department stores. You can procure yourself an affordable handheld for about $80, though you’d need a transmitter and receiver would necessary to use this (or an XLR cable if you don’t want to go wireless). Or, you could find a very good mid-range model (including the transmitter) for about $500.

However, super inexpensive handheld microphones are likely to result in crackly, less-precise audio, so it’s worth throwing a couple extra dollars at one if you plan on using it frequently. 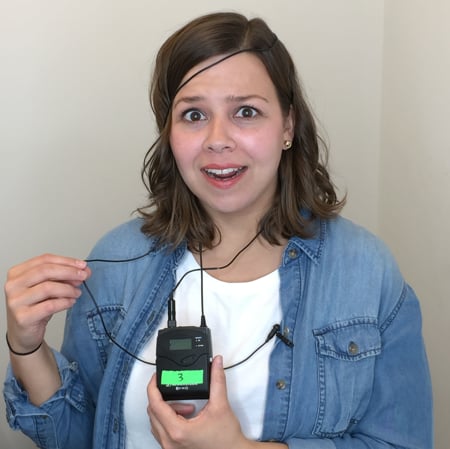 Lavaliers are the Shirley Temple of microphones: they’re super cute, were born during the Depression, and perform well even atop a windy Swiss mountain. There are a variety of lavalier styles and sizes, but the main appeal is that they don’t require the subject or sound technician to hold a physical microphone in order to capture and record audio.

Most lavaliers are pinned to the subject’s outerwear (often a collar or lapel), but there are a number of ways to conceal them so that viewers can’t see the mic at all. Lavaliers are most commonly associated with instructional demonstrations, speeches, and interviews, but they’re also great for recording dialogue if you’re shooting in a very wide frame or from a great distance. In these instances, a mounted camera mic would be too far away, and a boom would need to enter the frame in order to capture the dialogue.

For on-the-street interviews, the added fussiness and time of attaching the mic to passers-by means that a handheld or boom would be a much easier option. For musical performances; the lavalier will do a fine job of capturing the singer’s vocals, but you’ll need an additional mic to capture the instruments being played.

Lastly, if you’re shooting actors in intimate scenes or states of undress, concealing a lavalier is going to be uncomfortable and challenging, so a boom mic overhead will certainly suffice!

Price range: Some lavaliers are designed to hook straight into mobile devices and may only set you back $15 for both the mic and cable. If you’re looking for something spiffier, a name-brand, mid-range lavalier set will likely cost you around $150 (and that particular mic does not require a mobile device).

Putting it all together

Your sound recording options aren’t limited to just these three popular microphones, but one of the options is likely to do the trick for most video projects.

It’s also imperative to test your sound before committing hours of footage to celluloid, so experiment with your equipment in different environments before you go out and shoot. If you’re nervous about sound, always reach out to filmmakers you admire and whose video’s sound quality is impressive, and ask if they’d inform you of what equipment they used. In the wise words of his highness John Waters; ‘A ‘no’ is free.’

Once you’ve picked your mic, pick up some useful best practices for recording and editing sound, and ensure your films are up to sonic snuff!

Up next in Lighting & Sound

Quick tips: How to get great audio without a recorder

Don't have a microphone to capture sound with? Fear not, our phones make great audio recorders. We'll show you the basics.

How to avoid (and eliminate) white noise in your video

How to fine-tune your audio with Adobe's Parametric Equalizer

Audiophiles meet crisp, clear audio files. Adobe's Parametric Equalizer, polishes your vocals in no time, and this article breaks down how to use it.