Welcome back to our incredibly enlightening series of case studies about how filmmakers have achieved success by selling their titles on Vimeo On Demand. Each case study will demonstrate accessible, repeatable, and cost-effective tactics for VOD marketing that anyone can use. Last time, I wrote about how to build word-of-mouth promotion for your film. In this edition, hear how you can keep fans engaged and excited about your VOD release.

James Rolfe started posting videos to YouTube in early 2006, when online video sharing was still the Great Unknown. He uploaded reviews of old Nintendo games in which he’d rip each game a new one, channeling the frustration he’d felt as a young gamer in the 1980s. His ‘Angry Video Game Nerd’ series became a viral sensation, and he amassed over a million fans on his YouTube channel.

With a loyal fanbase that loved his game-review style, James enlisted two friends, writer/director Kevin Finn and producer Sean Keegan, to adapt the series into a hilarious feature film about The Angry Video Game Nerd reviewing the ‘worst game ever made’ — Atari’s ET. The failure of the game legendarily bankrupted Atari, and it was rumored that the company later dumped thousands of unsold game cartridges into a desert landfill. This backstory was the perfect material for a zany adventure about the Nerd trying to find the game so he could review it.

1. Crowdfunding: not just about pre-orders

People contributing to crowdfunding campaigns want to help a film get made, not just order it in advance. This is why you typically see contributors committed to a much higher price point than the cost of a download or a DVD – in AVGN’s case, 6,788 people gave an average of $48 each, earning the AVGN team $325,327 to spend on production and distribution (and making it IndieGoGo’s most successful film campaign of 2012).

When people contribute to a crowdfunding campaign, they are essentially already customers. And because it’s much easier to find repeat customers than new ones, one of the most clever things about AVGN’s wildly successful crowdfunding campaign was the fact that none of their crowdfunding perks included copies of the movie. Producer Sean Keegan understood that their crowdfunding backers were also the most likely group to purchase their movie upon release, so instead of giving away a download or a DVD of the movie once it was completed, AVGN rewarded fans with things like video messages from the Nerd, autographed photos, copies of the script, access to exclusive behind-the-scenes videos, or a mention in the credits.

The key is to offer limited edition perks that fans can’t get anywhere else, and that will never be available outside of the crowdfunding campaign. If your perks are downloads and DVDs, people might choose to wait and buy them later (and if they pre-order, they are less likely to buy the film again when it’s released).

Superfans of AVGN who gave over $100 were rewarded with exclusive videos while the movie was being made. Behind-the-scenes videos, photos, stories, and other exclusive content are like gold to superfans — engage this group, and they’ll repay you in spades by spreading the word about your film! Inviting superfans to join an exclusive club with special privileges is one of the best ways to make them feel like they are part of something bigger.

3. Filmmaking is a community effort – encourage your fans to get involved

Throughout his video career, James Rolfe has stayed engaged with his fans on a variety of social media platforms and listened to what they liked about his work.

But James went even further and let his fans contribute to the show — and eventually the movie — that they love. When the team started working on post-production for AVGN, they crowdsourced incredible talent from the eager fan community, including more than eighty visual effects artists from around the world who contributed to the film. They also secured an amazing score from Emmy-winning composer Bear McCreary.

Over the years, fans made things like theme songs, fan art, and all kinds of other cool things. In fact, the opening of AVGN The Movie is full of fan videos, which gave the AVGN community an opportunity to actually be IN the movie that they were funding and purchasing. When fans are encouraged to be part of the film experience, from funding to production to distribution and beyond, they feel a sense of shared ownership in the film, and will be your biggest evangelists. 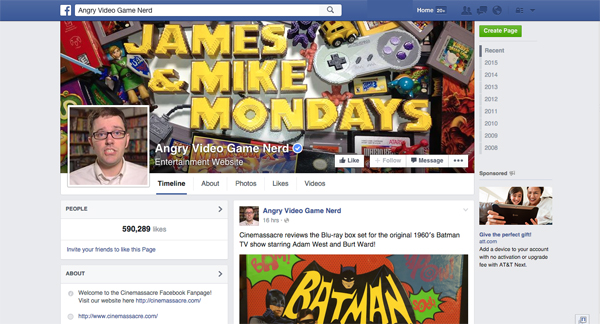 In the same way that politicians travel the country to boost their campaigns, the AVGN team spent the summer prior to their release on Vimeo touring the film around the country. Starting with a packed premiere at Hollywood’s Egyptian Theater, they held over 25 sold-out screenings in key cities where they had large fan groups, and promoted the tour through social media. In addition to the screenings, they held a number of Q&As, which they also filmed so they had great material to share as bonus features with their fans at a later time.

5. Set a date, spread the word

By the time the filmmakers chose to launch AVGN on Vimeo On Demand, fans had been waiting to see the film for nearly three years — and they were pumped! In the first hours of the release, the filmmakers posted an article on their Cinemassacre website and then linked to it from Facebook and then Twitter. The Facebook post had a major impact on sales on the first day, thanks to over 18,000 likes, nearly 4,000 shares, and more than 1,500 comments. 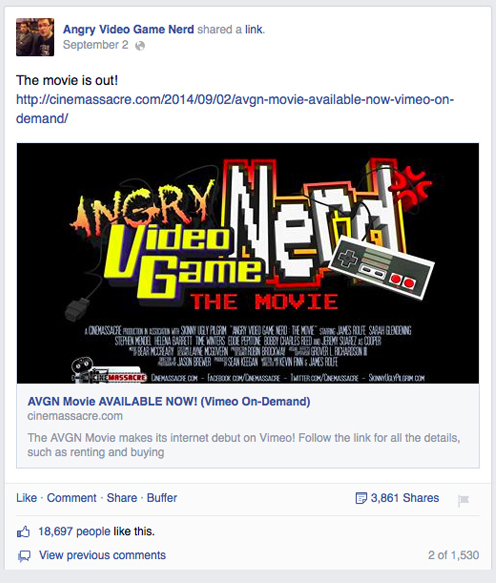 To further amplify the launch, they added the trailer to their YouTube channel the following day, and a number of their 1.7m followers received email notifications from YouTube. A second spike of sales kicked off as fans clicked the Vimeo link on the YouTube page and purchased the movie on Vimeo On Demand. Lesson learned: set up link annotations on your YouTube clips so viewers can easily click straight to your website where the Vimeo On Demand player is embedded. 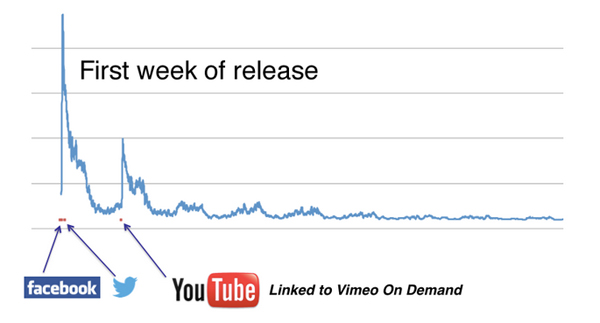 As with most VOD releases, the majority of people purchased and watched the AVGN movie on weekends, so the filmmakers prepared additional videos to post each Friday to engage more of the fan base.

They edited those Q&As we mentioned from their screening tour and posted them to YouTube (with links to Vimeo, of course), and saw a corresponding jump in sales each time. For even quicker wins, the AVGN team asked fans to contribute footage to the Q&A videos. 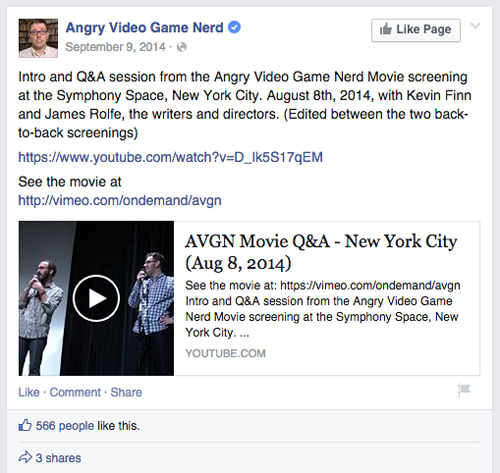 About six weeks in, the team uploaded the ET game review scene from the movie to Cinemassacre.com and linked it from Facebook. This video got more than 6,000 likes, over 500 shares, and nearly 500 comments. And again, sales took off over the weekend.

After the AVGN team had made mucho dinero on Vimeo On Demand, they put together a collector’s edition on Blu-Ray and DVD, which many of their customers eagerly purchased, even though they’d already bought the digital versions. Remember, your superfans will keep on buying from you. Because they love you, and they want you to keep doing what you do. One of the top reviews on the Blu-Ray’s Amazon page is from a customer who gave $200 during the IndieGoGo campaign, and then bought the download from Vimeo as well as the $25 Blu-Ray. He wrote: “worth every cent. Money well spent.” 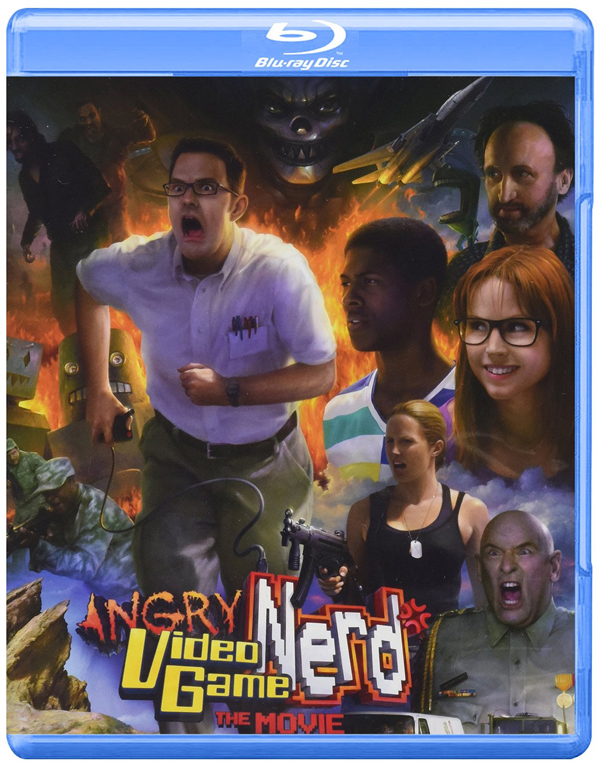 Angry Video Game Nerd The Movie is the first collaboration between James’ Cinemassacre and Sean and Kevin’s production company Skinny Ugly Pilgrim, and is a great example of how a popular video creator can transition from ad revenue to VOD, all while staying true to his fans. When you have a passionate audience, they are likely to be eager supporters of a more premium video like a feature film, in addition to the free videos you produce. To get a sense for how much money you can make through VOD vs. ad-supported video, take a look at our recent blog post that breaks down online video economics.

Turn your audience into paying subscribers with Vimeo OTT.

Up next in Video Monetization

How to make money with videos

Learn the basics of video monetization, the three video on demand monetization models you can choose from, and how to start monetizing your video content today.

11 awesome things you missed at Streameo

A handful of our favorite moments from Streameo, our first-ever virtual event dedicated to growing every kind of video channel.

Don't let subscriber churn get you down! Average churn rates are 30% per year across the OTT landscape, but you can keep your audience tuned in with these seven tips.