Skip to content
Login Join
Manage videos New video
Back To Menu
Inspiration
Vimeo Video School
Video for Business
Product News
Vimeo HQ
Copied!
In case your eyes haven’t graced our blog in a while, we’ve been busy sharing actual, real-life Vimeo On Demand success stories. In our last two installments, I covered how to grow word-of-mouth promotion and how to engage fans to ensure success on VOD. Today, let’s look at how filmmaker Cheryl Dunn and Alldayeveryday published a universe of content revolving around their film Everybody Street. Everybody Street is a gorgeously shot documentary that tells the story of many of the greatest photographers who’ve taken to NYC’s streets. Prior to making the feature-length doc, Cheryl Dunn had made a short film on the subject that received so much acclaim, she knew there would be demand for a longer film. Cheryl enlisted Alldayeveryday to help produce and market the film. Together, they viewed the film as the centerpiece in a much broader conversation about the culture of street photography. The popularity of the subject matter gave them an opportunity to take advantage of a whole range of additional materials to publish around the web — photographs, short film clips, short stories about photography, outtakes from the film, and more. 1. Make that trailer tweetable In the world of Web 2.0, anything you share needs to be highly clickable. What with so much noise and clutter in everyone’s social feeds, you need your trailer to stand out. How? The first step = an intriguing thumbnail. To ensure that the Everybody Street trailer would be extra clickable and shareable, the team chose this arresting image for their thumbnail: 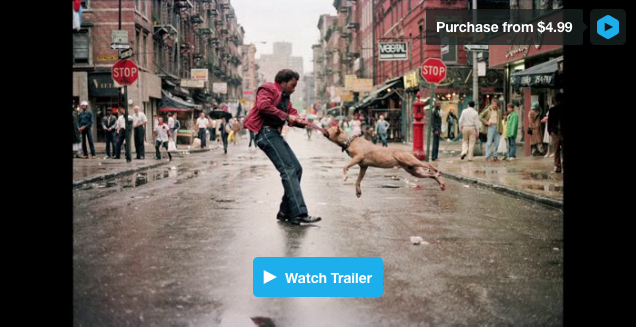 You guessed it: the trailer went viral, in part thanks to a popular post on the Kickstarter Tumblr blog. They released the trailer four months before the film was available to start gaining momentum and grab the attention of the street photography community. The trailer was shared far beyond diehard street photo fans, including in a post on Gizmodo where they placed an awesome animated GIF — soon the trailer was featured on hundreds of sites including thehundreds.com, aphotoeditor.com, slrlounge.com, ilovegraffiti.de, formfiftyfive.com, petapixel.com, hypebeast.com, theverge.com, and many others.

At that time, though, Everybody Street had only a basic Tumblr page, and they realized they’d missed the opportunity to send people to a website where they could collect fans’ email addresses and build a mailing list (hint: this is pretty essential to your direct distribution campaign). They also wished they’d enabled pre-order from the day the trailer was released, since they could have take many transactions during the wave of virality. 2. Yep, you do still need a website As much as your movie leans on its trailer, it also needs a powerful website. Generally, a film’s website doesn’t need to be too complicated, so Alldayeveryday chose to stick with Tumblr for everybodystreet.com and built a simple theme that included: Once the film was touring and available to purchase, the website served as a one-stop shop for any action people might take, from looking up a screening to watching the movie via Vimeo On Demand. 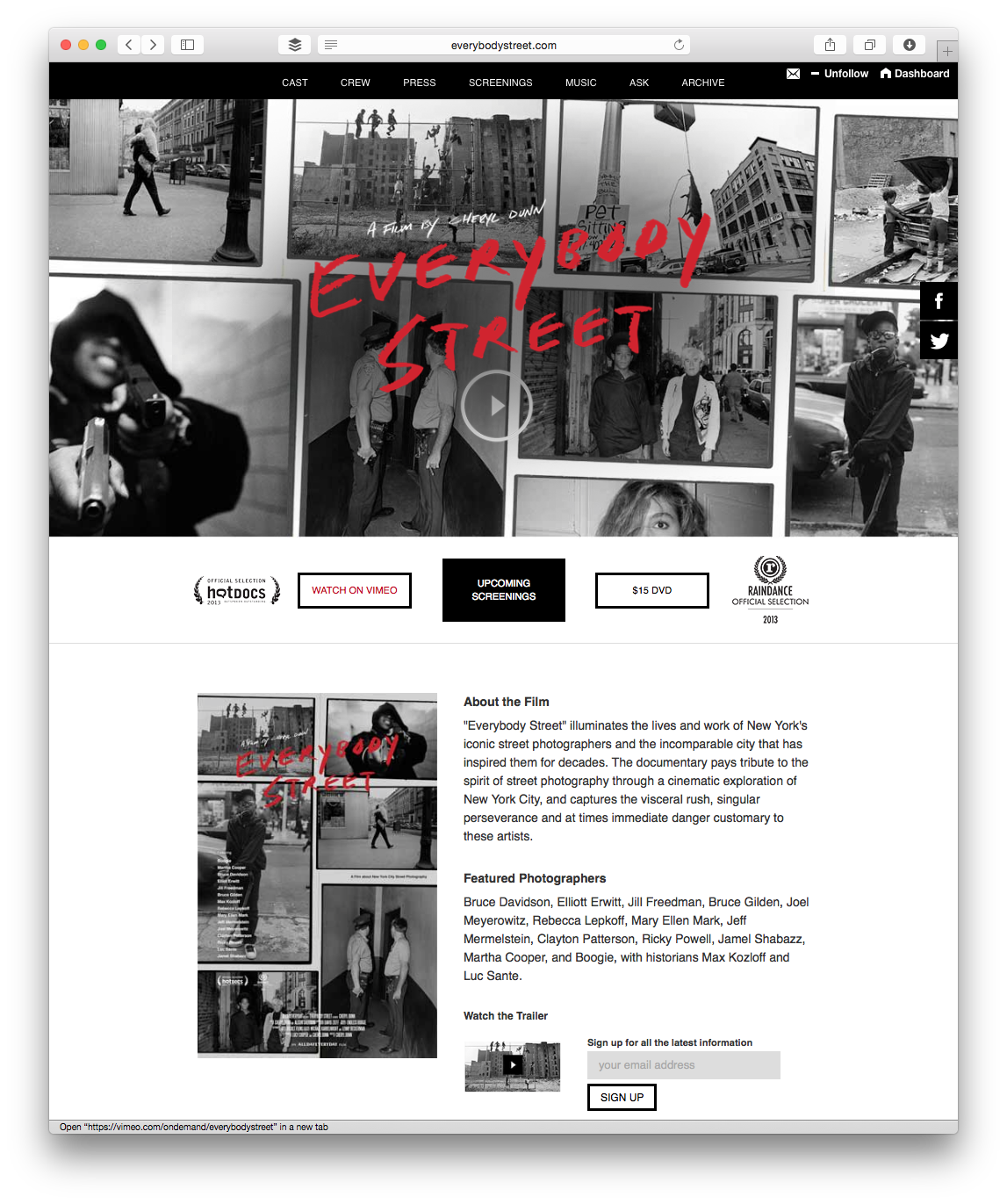 3. Social media is for publishing and participating, not shouting Early in the making of Everybody Street, Cheryl and team realized that social media and photo-sharing sites like Instagram have turned everybody with a smartphone into street photographers. That, paired with the photography-friendly audiences on said platforms, led to these channels becoming a central focus in the film’s publishing strategy. Almost daily, Cheryl published classic or contemporary street photos to Instagram, Tumblr, and Facebook. These engaging, highly shareable images were shared, reblogged, retweeted, and liked, and the interest in street photography began to spread even further. They published a variety of photos to each platform, ensuring that fans had a different experience on each site and would benefit from navigating between them. And given that social media is, um, social, this encouraged fans to ‘join in the conversation’ and share even more street photography stuff. 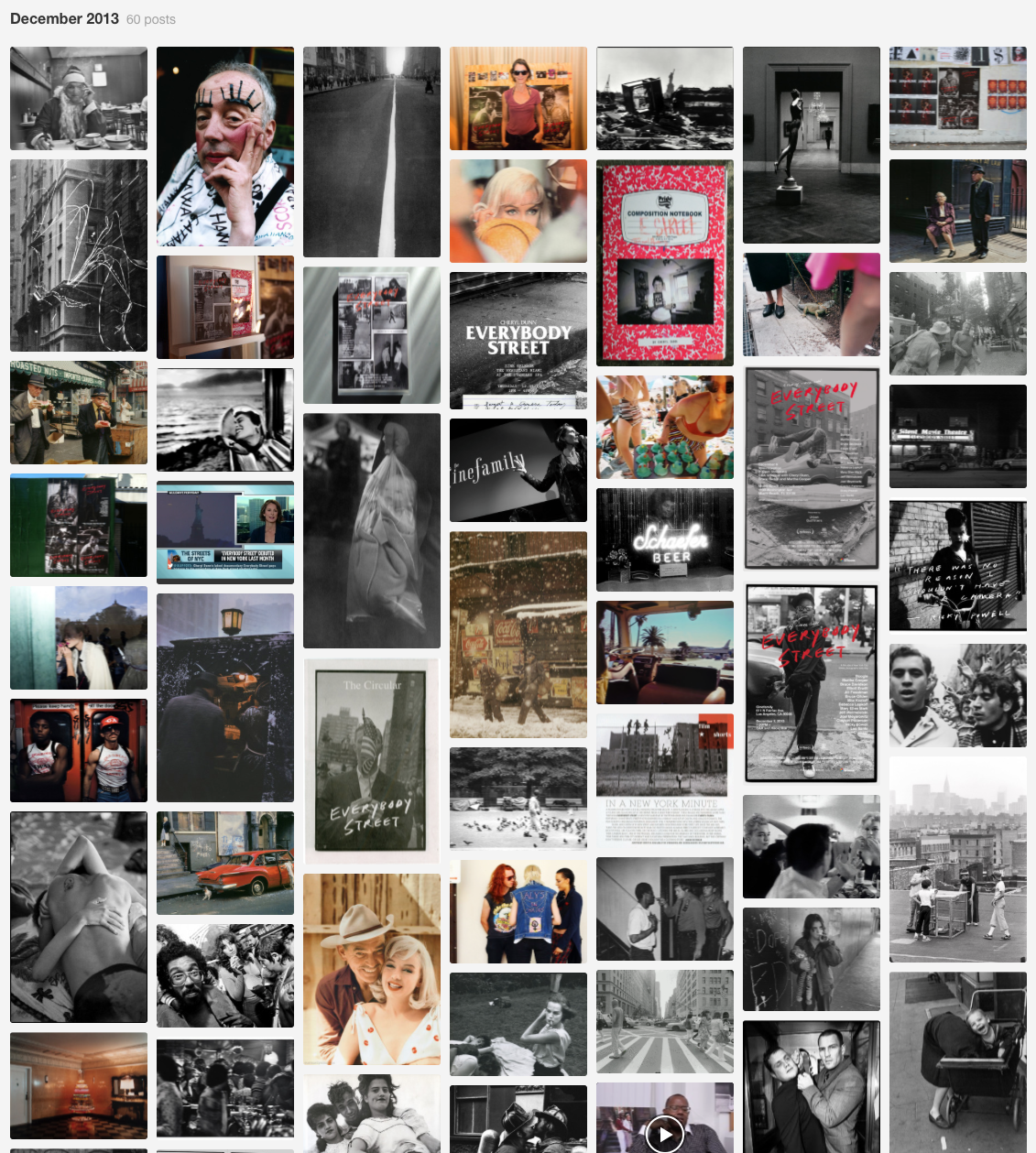 4. Existing embeds = increased income When Everybody Street was released for purchase on Vimeo On Demand, Alldayeveryday simply turned their existing trailer into the VOD trailer. All they had to do was upload the full movie and turn on rentals and downloads. Wherever the trailer had already been shared became an instant storefronts for the film. Behold the power of the Vimeo player. 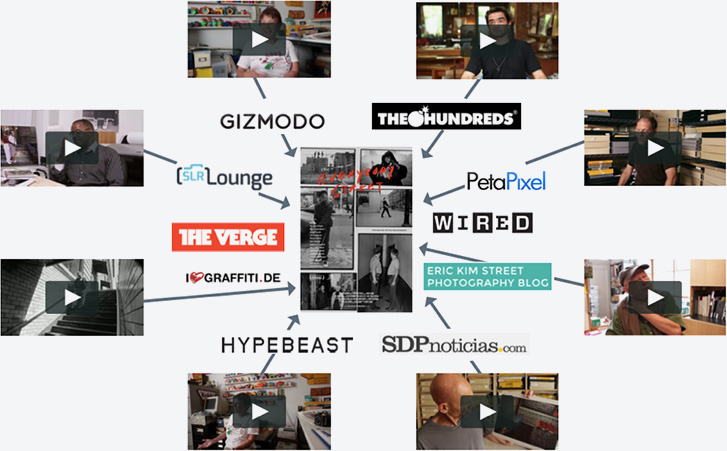 5. Exclusives are publishing gold To reignite excitement once the film was released, Alldayeveryday cut and published a number of mini profiles on photographers, including Bruce Davidson’s first darkroom, Joel Meyerowitz on what makes an interesting photograph and other extended interviews. To encourage press people to cover the release, they offered exclusive clips and stills that provided each writer with a different angle. Exclusive clips and photos were featured on a number of sites including GQ and The New York Times. (Remember the power of the Vimeo Player — just like the trailer, other video clips attached to your page also include a buy button that allows viewers to purchase the movie from those embedded players, too.) They also gave the press discount codes to encourage even more purchases. To create a deluxe edition of the film and drive more sales, they reserved a few of the clips for their purchasers’ eyes only.

But wait, there’s more! Alldayeveryday did so many awesome things to promote Everybody Street, that we’ve broken this case study into two parts. Tune in next week for part two, and in the meantime, glimpse my articles about growing word of mouth and working with fans. Or, get started now with Vimeo’s trailer maker. UPDATE! You can now read Part 2 here This article was co-written by Jeremy Boxer, and we owe a huge thank you to Alldayeveryday for giving us all this amazing stuff to share.

73% of customers are more likely to click "buy" if they've seen your video.

Up next in Video for Business

Employee engagement: the key to company culture (even in a remote world)

Employee engagement is more important than ever to build a lasting and effective company culture. Learn how to engage employees, even in a remote world.

Why diverse and inclusive marketing matters

How to spice up your LinkedIn marketing strategy

Get up to speed on Linkedin with advanced strategies on profile optimization, content, distribution, and how video can engage your audience.