This is the first in a series of case studies about how filmmakers have achieved success by selling their titles on Vimeo On Demand. Each case study will demonstrate accessible, repeatable, and cost-effective tactics for VOD marketing that anyone can use.

In 2013, Griffin Hammond wanted to turn his burning (haha) passion for Sriracha hot sauce into a short documentary about the enigmatic yet familiar green-capped pop culture phenomenon. On his journey to discover and share where Sriracha comes from and why people love it, Griffin had to employ creative grassroots promotion to make his dream documentary a reality. Keep reading for his practical advice on how to get press for your film without breaking the bank.

1. Make it easy for fans to learn more and spread the word

Before Griffin even began filming his documentary, he knew Sriracha had an existing fan base that he could activate for grassroots promotion. To keep in touch with them, Griffin set up a Tumblr site for the film where he could post updates. He also created a Facebook page, a Twitter handle, and a Pinterest board. This made it easy for fans to point friends to a place to find info about the film. The one thing Griffin says he regrets is that he didn’t create a form to collect email addresses from fans in the early stages — both he and we strongly recommend building a mailing list as early as possible.

2. Get influencers on board with your project

Griffin started his filming with Randy Clemens, the author of The Sriracha Cookbook. Randy was happy to get involved and was so excited by the idea that he tweeted to his 4,000 followers: 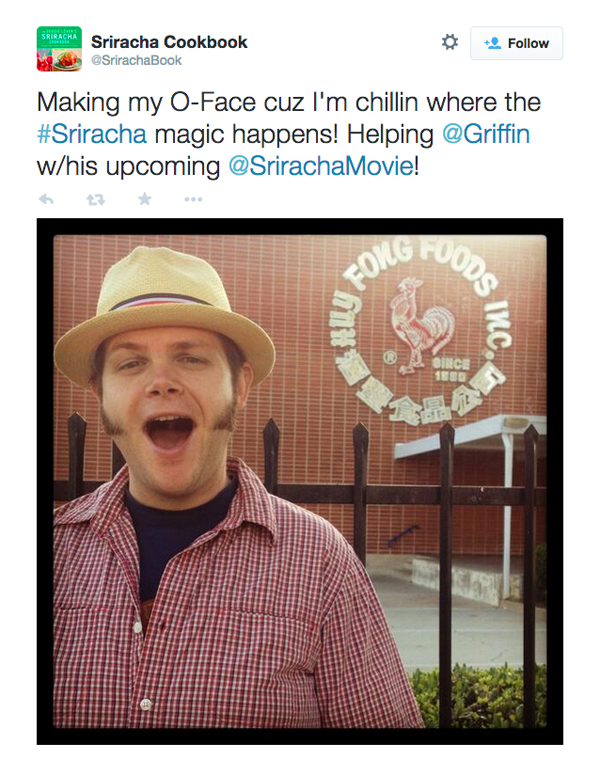 A writer for Orange County’s local paper OC Weekly saw the tweet and wrote an article about the film. Word continued to spread thanks to additional articles in Bon Appetit and Huffington Post. As more influential writers discovered the cool — sorry, HOT — story and spread it even further, Griffin continued to beef up his fan base.

3. Use crowdfunding for more than just raising money

By the time he was ready to crowdfund on Kickstarter, Griffin had more than 1,700 fans eager to see his film, and only a few minutes of footage to share. Griffin realized he could do more than just raise money with Kickstarter — he could use it for marketing his film to an even wider audience.

Crowdfunding platforms like to celebrate their success stories. When Kickstarter chooses featured campaigns, they look for those with a noteworthy performance or concept. Armed with this knowledge and the ultimate goal of becoming a Kickstarter featured campaign, Griffin set a modest goal of $5,000, expecting to reach it quickly. Sure enough, he raised $5,000 within the first eight hours of the campaign, thanks to the buzz already swarming around his idea.

Kickstarter featured his campaign, and the Los Angeles Times covered it in an article. By the time the campaign was complete, Griffin had raised $21,009 — more than four times his initial goal. He had also gathered 1,315 hardcore fans who put money into his project.

With his fundraising goal achieved, Griffin went off to California and Thailand for a few months and returned with a fun and fresh half-hour film that uncovers the history and cultural phenomenon behind Sriracha. It would have been easy for Griffin to lose the initial momentum he’d gained from crowdfunding, but instead, he kept the buzz going by posting frequent social media updates throughout his filming. 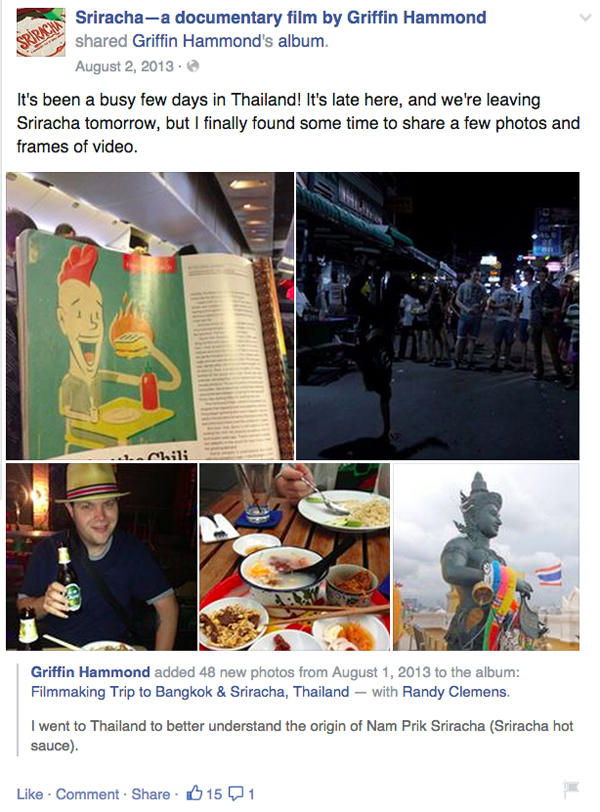 Griffin was determined to get his film in front of fans as soon as it was finished — this was a key part of his word-of-mouth strategy. Griffin first opted to release his film on Vimeo On Demand because it allowed him to embed the film trailer on his Tumblr site and Facebook page and sell it directly to viewers directly within the Vimeo player. He also used Vimeo On Demand to give his Kickstarter backers access to the film, so they would watch the film, then share the Vimeo page with their friends.

5. Get personal — writers are people, too!

Griffin wanted to reignite the word-of-mouth and press momentum he had experienced while making the film, so he wrote personalized letters to each of the writers who had covered the film previously. He commented on things like their individual writing style or sense of humor, and shared his film’s release date with each of them. He never hired a publicist, nor did he send a single press release.

When Griffin published the film on Vimeo On Demand, a number of the publications that covered it before (LA times, Huffington Post, SF Gate, Daily News) embedded the trailer (which includes a simple ‘Buy’ button) in new articles and the chain of discovery started all over again. This time, even an NPR writer found about the film and wrote a piece. This article became the most widely shared story about the film.

Over the next few months, Sriracha made it into lists of top food documentaries and other articles in mic.com, relish, Cool Material, Foodporn, and many more. All of these sites embedded his trailer, which allowed readers to purchase the film without leaving the article they were reading.

6. Don’t forget what made you great

With a successful launch and sales coming in, Griffin wanted to ensure he could keep the heat on and sustain his film’s momentum. He was submitting (and getting accepted) to film festivals, but he focused his efforts on what made him successful in the first place — giving the Internet what it wants.

Griffin created a series of animated GIFs using clips from the film to illustrate “These GIFs Show How Sriracha Sauce Is Made.” This meme-friendly approach appealed to a writer at Business Insider, who published the images in a write-up about the film. The cool factor of these animations quickly spread to imgur and then reddit, bringing the Sriracha film to huge audiences in a very short amount of time.

Overall, Griffin’s strategy for releasing Sriracha is a great example of how filmmakers can encourage word-of-mouth discovery and sharing without hiring a PR agency. The vast majority of sales he made were thanks to these DIY press efforts. To read more of Griffin’s saucy story, check out the article he wrote for Videomaker magazine.

And for more tips and best practices to help you sell your work, visit the Vimeo On Demand Selling Handbook, a handy resource for selling video online.

73% of customers are more likely to click "buy" if they've seen your video.

Up next in Video for Business

Your guide to the best software for video marketing

We’ve got two words for you: Vimeo Create.

Meet the choreographer taking her dance community global with video

Korma Aguh-Stuckmayer is building a digital dance community on Vimeo. She shares her six tips for navigating the virtual space.