Charles Dickens may not have been talking about rude college students bent on pranking each other to death when he wrote the sentence “It was the best of times, it was the worst of times, it was the age of wisdom, it was the age of foolishness…” but those 24 words sum up this week’s Staff Pick Premiere quite nicely. Based on real events that happened during director Jonathan Hodgson’s days as a wiseguy art student, “Roughhouse” is an animation pulled right from the sketchbooks he drew in at Liverpool Polytechnic between 1979 and 1982.

It’s hard to pick a favorite piece of “Roughhouse.” The Scouse accent of Liverpool and Brummie dialect of Birmingham, UK, as well as the clumsy movements of the puckish (and punkish) teen characters provide a charming and warm authenticity. As if its nostalgic visual language weren’t engaging enough, there is a sense of gratitude despite conflict in this story ultimately about growth, forgiveness, and mercy.

We had many questions for Jonathan about this personal film that was 40 years in the making. Read on for excerpts from our conversation. 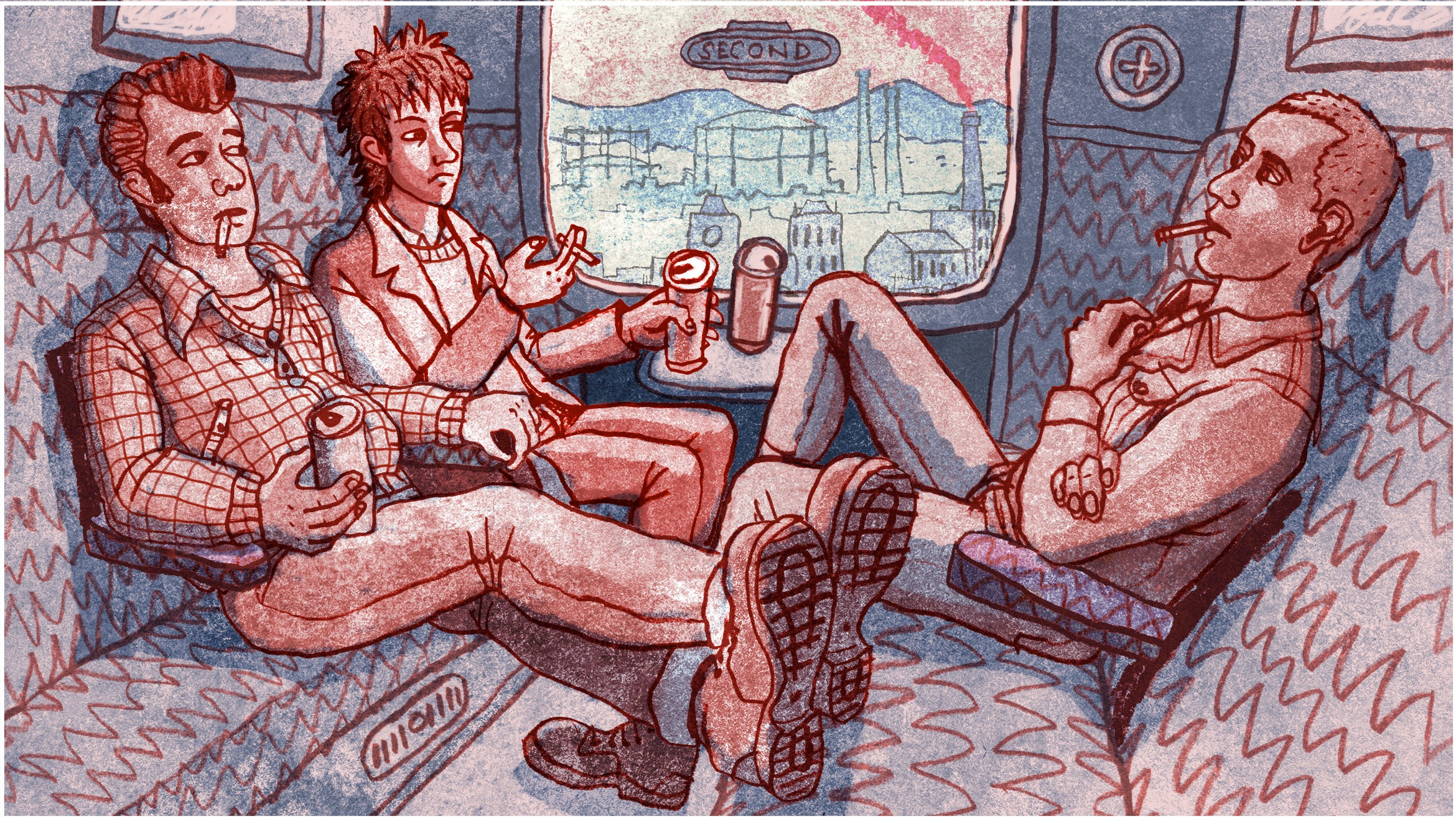 “‘Roughhouse’ is a story based on real events that took place when I was a student in Liverpool in the early 1980s. There was a disagreement over the rent in the flat we were living in. Things got out of hand, and it didn’t end well. The episode eventually blew over, but it left a bad taste in my mouth.”

“I was studying animation at Liverpool Polytechnic between 1979 and 1982 when the events that inspired ‘Roughhouse’ were taking place. In the early planning stages of the film, I hit upon the idea of revisiting the artwork I had produced as an art student. I thought it might help to give the film a more authentic 80’s look. I’m lucky to still have all my old sketchbooks from that time when I was doing a lot of drawing in nightclubs and at parties. That became the inspiration for my 1983 film ‘Nightclub,’ which was made at the Royal College of Art (also on Vimeo).

Fortuitously, during the preproduction stage of the film, an ex-girlfriend from my college days got back in touch. She had been clearing out her house and had found an old portfolio of my artwork dating back to the early 80s, which I’d forgotten ever existed. This proved to be a treasure trove of imagery, some of which was recycled and went directly into the design of the film.

Most of the work I was doing back then was monotone, mainly pen and ink and pencil drawing. But for ‘Roughhouse’ I wanted to use color to help convey the emotion of each scene. I chose to limit the palette to just a few colors in a similar way to ‘Nightclub.’ (Which incidentally was painted with food coloring, because it was cheaper than ink.) I’m a big fan of British art from the mid 20th century and I was particularly drawn to the work of Edward Bawden and Eric Ravilious.” 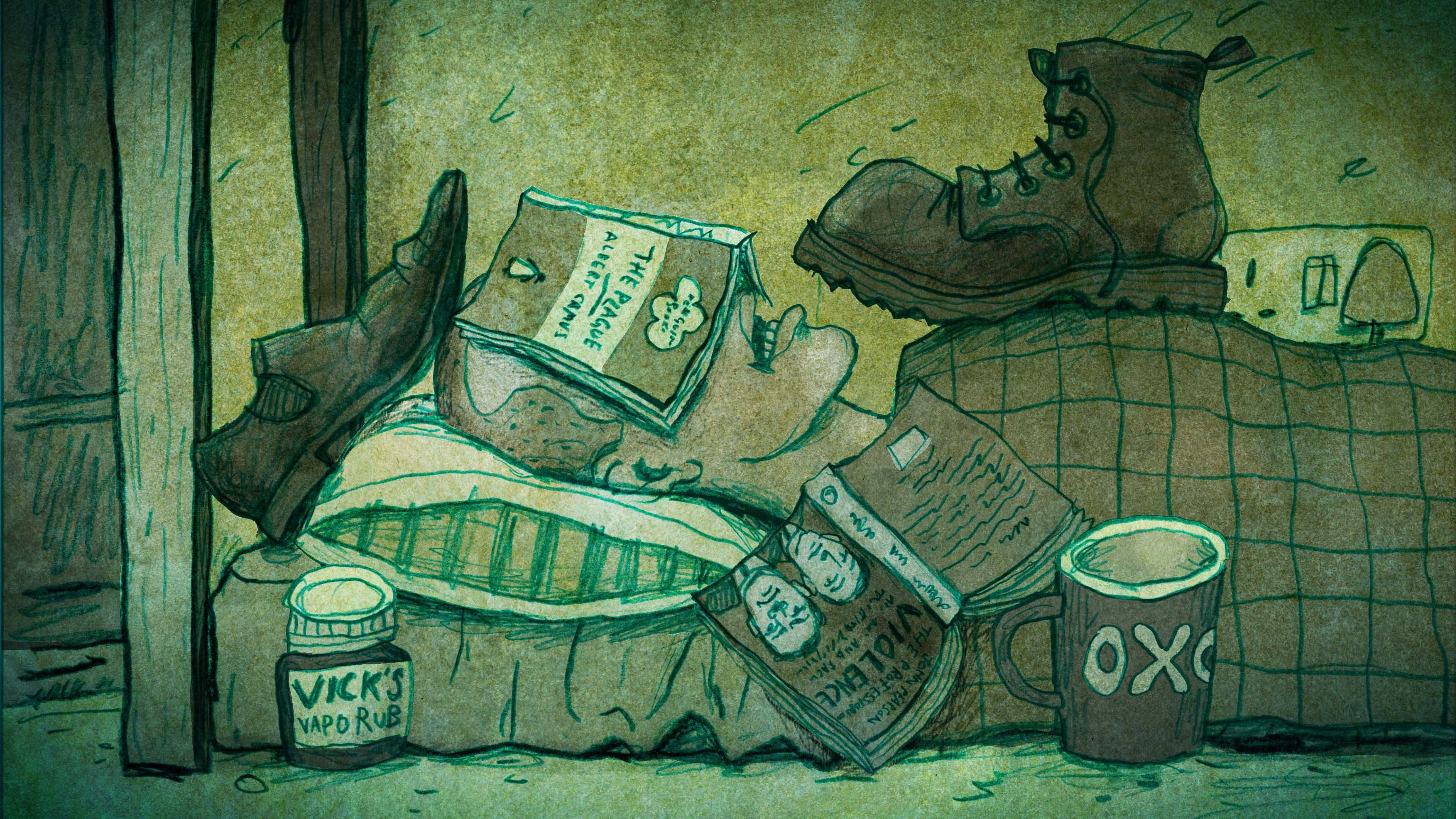 On staying true to the time and place the film is based on:

“It really irks me when I see a film depicting a specific location and period of time that I have lived through, where the production team clearly hasn’t done their research properly and have got all kinds of details wrong. ‘Roughhouse’ is based on events from my own life in the late 70s early 80s, so it was essential for me to get all the details right.

I grew up​ in​ Birmingham in the West Midlands, which back in the 70s was a heavily industrial area where there wasn’t much of a cultural scene. Most people worked in steel mills or car factories. Liverpool, where the story takes place, was less than 100 miles away, but a very different kind of city altogether. Less industrial and quite run down, but teeming with actors, artists, poets and musicians. The ‘Scouse’ accent ​wa​s completely different from the way ‘Brummies’ sp​o​k​e​. The authenticity of the accents was very important for me, so I hired some actors from Birmingham and others who came from Liverpool and Manchester.

What I hadn’t bargained for was that the contemporary Brummie accent has changed significantly from the way people used to speak 40 years ago. The slang words are different and so is the intonation. So we had to teach the voice actors how to speak​​ in the old Brummie way. Actor and theatre director David Benson, who played some of the older parts, is from Birmingham and a similar age to me and he did a great job in coaching the younger actors. To my ears, there are still a few errors in pronunciation here and there that I’ve had to learn to live with, but I’m sure most people watching the film wouldn’t notice anything out of place.” 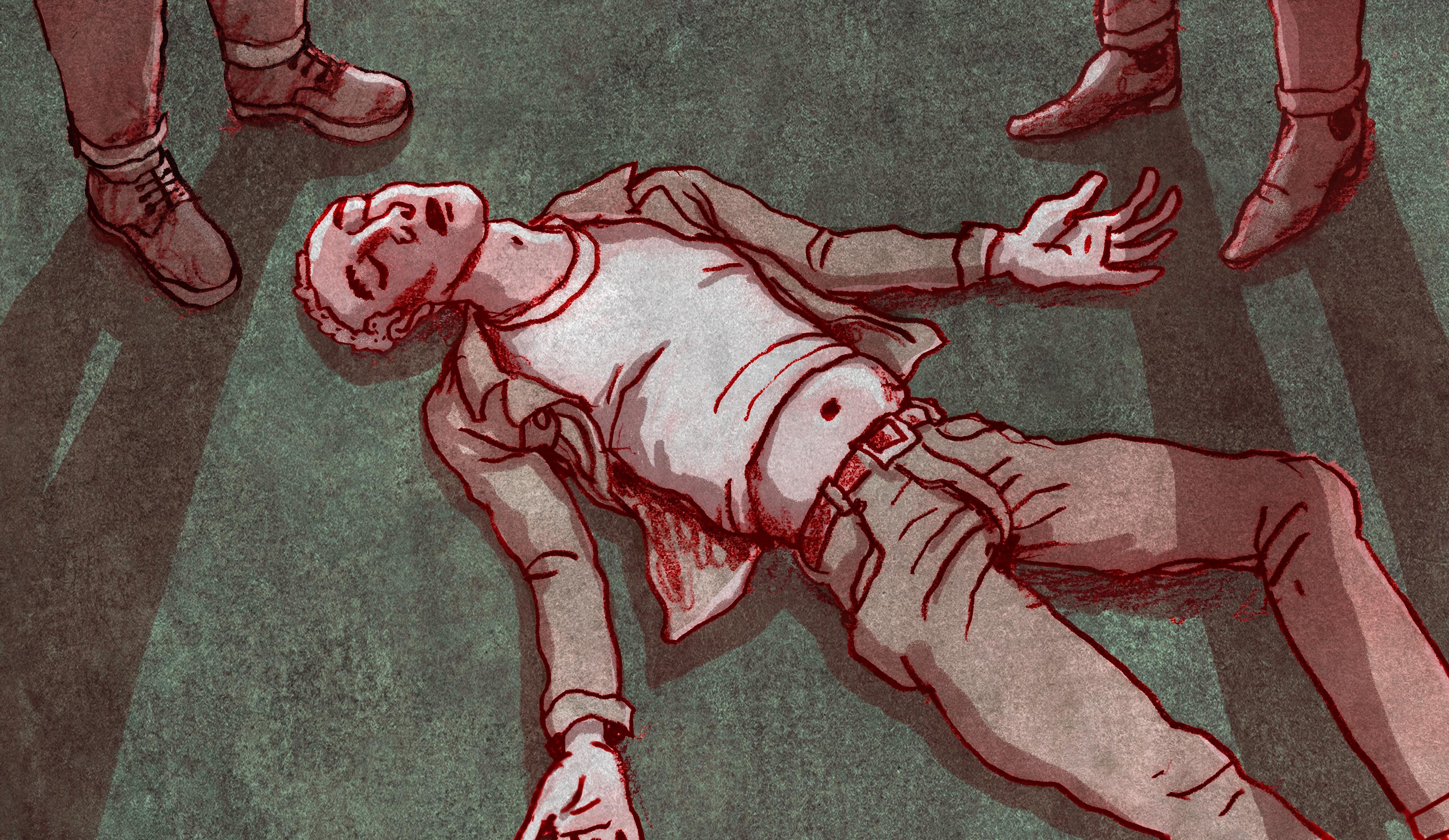 “It took a long time to shape the idea into a story that would work as a short film. At first, I tried to develop it as an animated documentary. I eventually decided it would be better to fictionalize the narrative and characters, which enabled more flexibility in the storytelling and also provided some anonymity.

The main challenge was finding funding. It was an ambitious proposal, which would need a fairly large budget. After three failed attempts to get funding in the UK, I realized there wasn’t any hope of financing the project there. France was and still is the only place that funds short animation properly, so I decided to try my luck there.  It took a while to find the right production company, but I eventually hooked up with Papy3D Productions in Paris, which turned out to be a very wise decision.

Once we were in production, the main challenge was linguistic. The animation team all spoke English much better than I spoke French. The subtleties of the regional dialects in the film’s dialogue were hard for the animators to understand. Also the visual language of character animation is quite different in France and movement tends to be much more elegant. I wanted the movement of the characters in ‘Roughhouse’ to be quite clumsy and ungainly. I had to gather a lot of live action reference to show the way English teenagers move, which is quite different from French kids.” 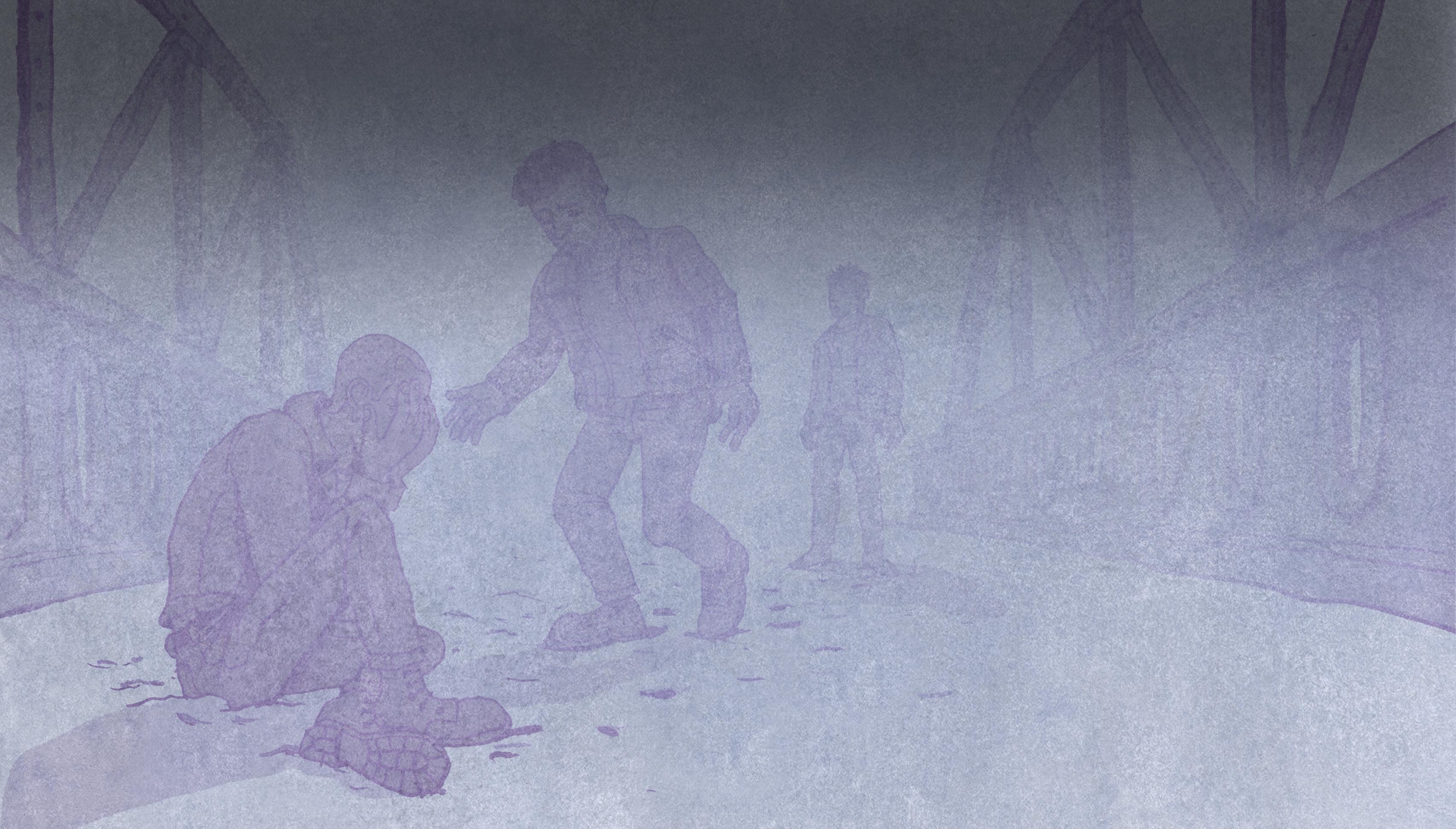 On nailing down the movements:

“Early on in the production, there was one particular shot where the highly sophisticated French style of animation struck me as being out of keeping with what was being depicted. It was a shot where the main protagonist Shirley is playing ‘air guitar’ along with a punk record. Gabriel Jacquel, who was one of the lead animators, had created a really stunning sequence. But the performance looked slightly too elegant and proud. His animation was almost balletic, but I had envisaged something much more slobbish and uncoordinated, like a drunkard staggering around the room. I am a fairly crude animator and never developed the amazing skills that some of the French animators have. But I’ve learned to work within my limitations and I suppose that has become part of my signature style. Seeing my ham fisted characters brought to life by a virtuoso animator just felt wrong somehow.

To help the animators to understand my vision for the movement, I filmed myself on my phone, acting out the way I thought the performance should look. This became the method for developing a more clumsy, raw style of animation. I persuaded some animation students from Middlesex University, none of whom are trained actors, to perform some of the scenes from the film, which I also filmed on my phone. I also showed the French animators sections from an 80s British film called “Rita, Sue and Bob Too” directed by Ken Clarke, with a brilliant depiction of an alcoholic dad, which was excellent reference material.”

“The proposal for ‘Roughhouse’ was rejected three or four times before it finally got funded. So tenacity and self-belief are essential qualities for an independent animator. It’s very easy to get disheartened and give up when your project is rejected by funding organizations. But if the project is really important to you, then you should keep plugging away at it. Making a short section of the film in your spare time will make the project seem more real and can really inspire people. It will also help potential backers to visualize and have confidence in the project.”

“I’ve got an extensive list of embryonic film ideas that are all on the back burner right now, waiting for the right moment to be developed. I am currently very busy working on a film for a quite extraordinary musician called Matthew Herd, which should be completed in the early autumn.”

A young drama student must reconcile the potential pros and cons of a defining lead performance act.

They say that the punk rock movement was born in Mid 70's New York City. If so, then David Godlis was in the delivery room.