Skip to content
Login Join
Manage videos New video
Back To Menu
Inspiration
Vimeo Video School
Video for Business
Product News
Vimeo HQ
Copied!
Did I lock the door when I left for work his morning? Did I remember to turn off the stove? Is my apartment being ransacked by wild animals right now? These are all questions you’ve likely asked yourself during your frantic morning commute. Well, maybe not the bit about wild animals, but you get the point. Life today can feel like a blur of priorities, some of them trivial, some of them profound, but all of them competing for your undivided attention. For Frederic Siegel and the eponymous protagonist in his short film “Ruben Leaves,” these distractions aren’t just a nuisance, they’re an existential crisis. This subgenre of modern neurosis has grown even more acute in the age of smartphones as we’ve begun to find ourselves subject to an endless barrage of messages, push notifications and fresh posts on social media. It’s a small miracle that we’re able to accomplish anything at all. To borrow a quote from Terry Southern’s classic screenplay for Dr. Strangelove: to feel overburdened by multi-tasking in the modern world “is not only possible, it is essential.” And just as Dr. Strangelove made light of some very real anxieties, so too does “Ruben Leaves.” The film is a funny and colorful take on the constant preoccupations that consume our thoughts. With a spare, yet vibrant visual aesthetic Siegel deftly explores the line between run-of-the-mill anxiety and outright paranoia—a line that is blurrier than you may expect. Coming off an insanely impressive festival run—more than 100 different film festivals and more than a dozen different awards—“Ruben Leaves” is a film that clearly resonated with audiences, which comes as no surprise—the central anxiety vexing Ruben is something I believe we can all relate to on a certain level. We sat down with Siegel to discuss the genesis of his film, which premieres online today exclusively on Vimeo! Vimeo: What was the inspiration for “Ruben Leaves”? How do you relate to Ruben? Frederic Siegel: The film is actually based on my own bad habits of checking things and being anxious about having my front door locked or having the windows closed etc. I also have to regularly walk back to my flat to check if the door is really locked. So basically, Ruben is inspired by myself and some of my family members, who also have similar obsessive-compulsive habits. This short strikes me as a story that is particularly well-suited for animation. Is that a consideration of yours when picking a story to produce? I.e. how much or how little does the medium of animation inform the stories you decide to tell? I don’t feel like I’m looking for stories to specifically tell with animation. I think most of the stories I come up with just have a fantastical and surreal thing to it. And as I really like drawing, animation (or illustration in general) is the best way for me to express the worlds in my head. And as I’m always thinking very visually when I’m imagining a story, narrative and visuals go pretty much hand in hand. What I also like about animation is that you can build all those imagined worlds according to your own rules. Things that are perceived as surreal in real life, become very normal and real in an animated world. I think this gives you the possibility to make any emotion or event believable, even if they are weird or hard to understand. 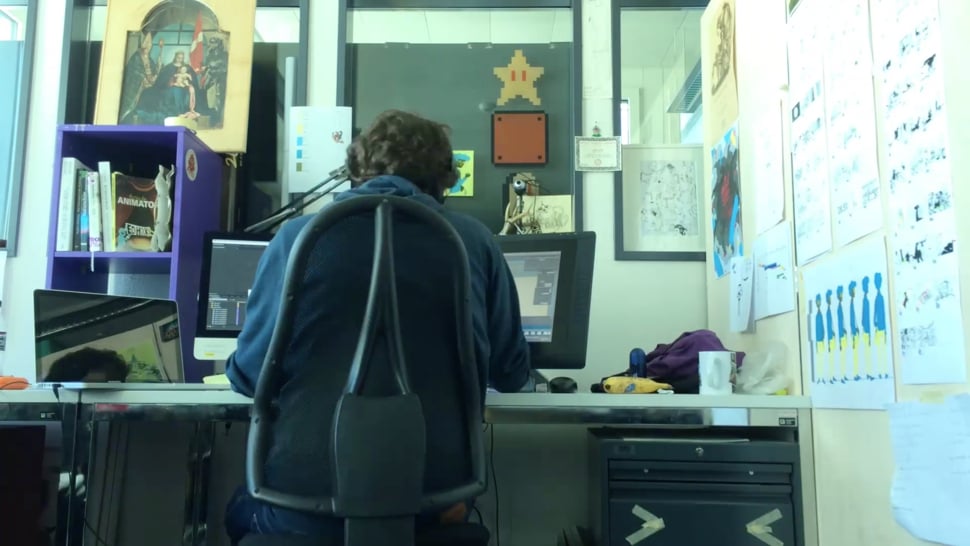 After watching the film five or six times, I’m torn between two competing interpretations. On the one hand, the film could be interpreted as a light-hearted portrayal of an anxious guy with a fanciful imagination. On the other hand, a darker interpretation would have you believe Ruben is paranoid and delusional. Where do you stand on these competing interpretations? I’m not sure, but I think in the end it is a mix between your two interpretations (the regular anxious guy and the mentally ill guy) because I don’t feel like the film is either as light-hearted or as dark as you mentioned. But as Ruben is kind of an alter ego of myself, I actually just envisioned him as a regular guy who is sometimes just a little too stressed. By concentrating so hard on his work, he tends to forget other things and gets anxious because of it. I see that one could also interpret this as a result of a mental illness, but this was not my initial point as my own condition is not that severe. Can you tell us a little about the production of “Ruben Leaves”? How long did it take you and what sort of team were you working with? “Ruben Leaves” was created as my graduation film project at the Lucerne School of Art & Design in Switzerland. The whole production process from the first script to the final film took about eight or nine months, while the animation production itself only took about four months. Most of the film I produced and animated by myself but I had some students helping me with some animation parts. I also had two good friends who took care of the sound design and the music. The infrastructure and the teachers of the school were a great aid as well. 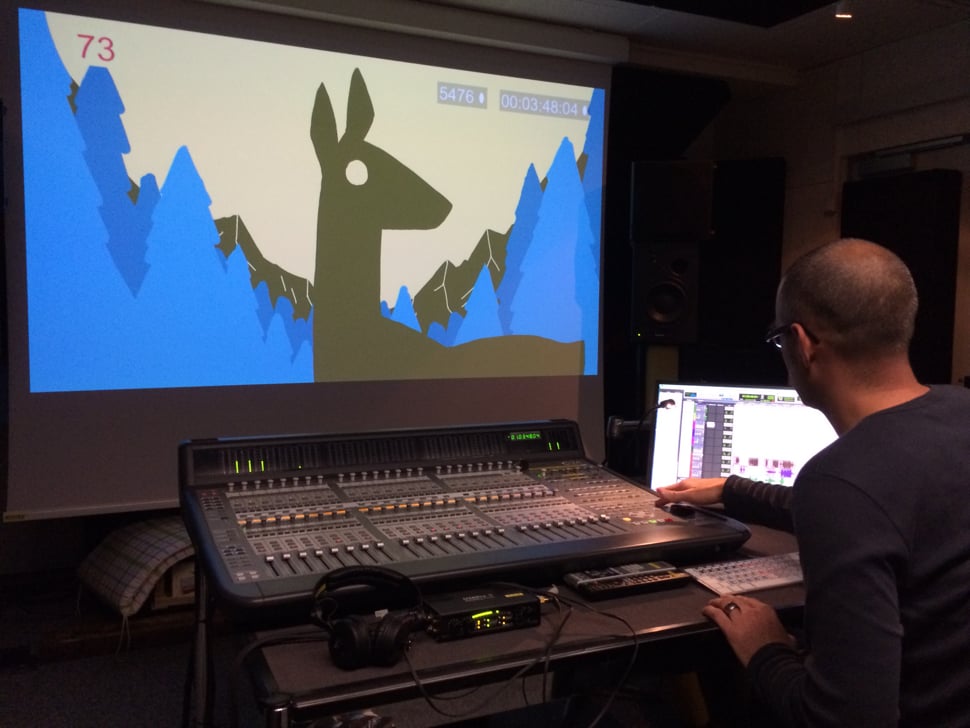 What was the biggest challenge you encountered in making “Ruben Leaves”? This was my first “big” short film, so the whole process was a huge challenge itself. I think the hardest part though was the writing process. I struggled a lot to find this balance of coherent narrative and deliberate confusion. Well, I hope I managed to [find the right balance]. “Ruben Leaves” is really striking from a stylistic standpoint. Where did you derive some of your visual inspiration for the film? The visual style formed very naturally over the last few years, based on the style of a music video I created a year before I started production of “Ruben Leaves.” For this video, I only used the three basic colors of the cover art of the band’s album. The result was this very flat and print-like animation style. I was also inspired by other contemporary animation directors like Charles Huettner, Nicolas Ménard, and Alex Grigg, just to name a few. 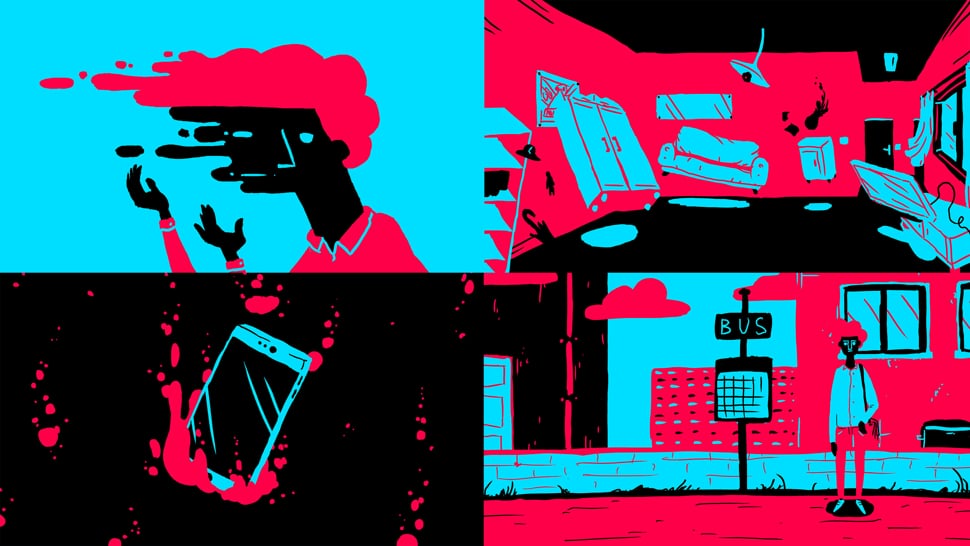 The short has played at over 100 festivals! First of all, congratulations. Secondly, how do audiences respond to the film? Any interesting individual reactions or interpretations that come to mind? First of all, thank you! Secondly, I’m very happy that most of the reactions at festivals are very positive. Mostly, people tell me, that they don’t really understand the overarching narrative, but that they like the style and the way the scenes are connected. I also like to hear all the different, wild interpretations that would have never come to my mind! This already led to awkward Q&A situations where I had to explain every detail of the whole story because it seemed like no one in the audience had a clue what the film was actually about… Any chance we’ll be seeing more of Ruben in the future? What’s next for you? I think I’m done with Ruben as a character for the moment, but I’m actually working on a new short film that will take up a certain aspect of “Ruben Leaves.” It will be a sci-fi-ish film about modern communication and its impact on our social relationships. We are pretty early in production, so don’t expect it to be released soon. Furthermore, I’m teaching animation at a university here in Switzerland and I’m working as a freelance animator and director as a part of the newly-founded creative collective called Team Tumult in Zurich. Check out more of Vimeo’s Staff Pick Premieres here. If you’re interested in premiering your short film as a Staff Pick Premiere, please check out www.vimeo.com/submit for more information.