Skip to content
Login Join
Manage videos New video
Back To Menu
Inspiration
Vimeo Video School
Video for Business
Product News
Vimeo HQ
Copied!
Making videos is pretty awesome. Video encoding, however, is not always so awesome. Plus, sometimes tricky mathematical calculations are involved. We’re right there with you, but encoding is important for getting your best-looking footage out into the world. Let’s explore what goes into it, so you can export beautiful films with minimal headaches. As we go through these five encoding settings, we’ll use two export examples as illustrations: a version to upload to Vimeo for sharing the film with the world, and a higher-quality version for our archives to keep it nice and safe for years to come.

1. Resolution: The dimensions of a video in pixels, measured in width by height.

When you initially shoot your video, you set your resolution in-camera. When it comes to exporting, though, you can determine if you want to keep the original resolution you shot in, or downsample it to a smaller resolution. A word to the wise: you can up-res as well, but never to a satisfying result. Generally, you should just export at the resolution you shot in. While the aspect ratios can vary, you’ll find that the most common resolutions to both shoot in and export to are, from largest to smallest, 3840 x 2160 for 4K for UHD, 1920 x 1080 for Full HD, and 1280 x 720 for web or broadcast HD. 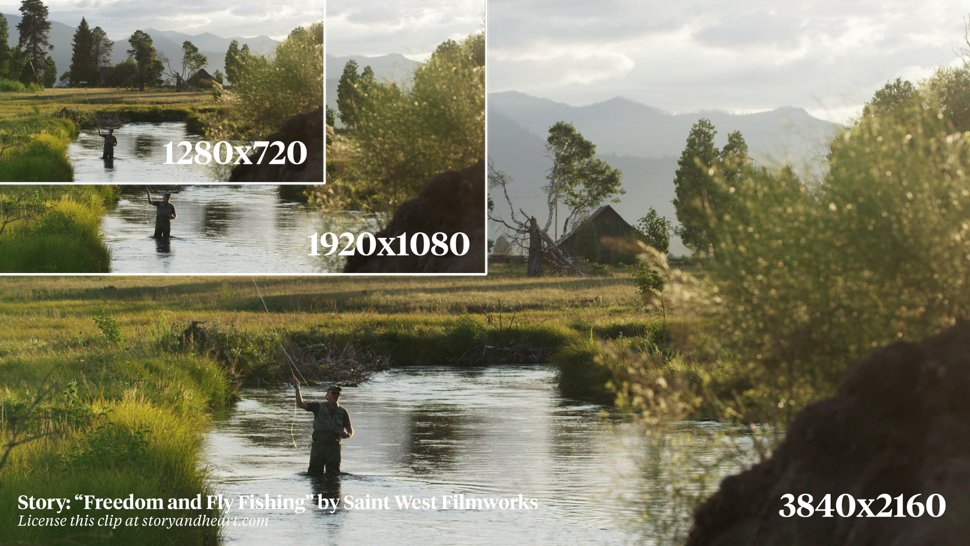 We can get Full HD with our Vimeo PRO membership, and we encourage you to upload the highest resolution you have available to Vimeo. For the version that we’ll keep for our personal archives, we’re going to export it in the resolution we edited in, which was 3840 x 2160.

2. Frame rate: The number of individual frames that display on screen per second.

Before we get into what specific frame rate we’re going to export to, let’s look at the two types of frame rates available: progressive and interlaced. Progressive frames (p) are what you typically think of when you’re picturing video — full, individual images refreshing in succession. Interlaced frames (i) chop up each frame into a series of horizontal lines that, as a group, are called fields. Each of these fields flashes quickly enough so that your eyes discern it as a single image. Interlaced video was the standard for a long time due to its ability to run at lower bit rates (which we’ll talk about shortly), but after broadcast technology, monitors, processors, etc. all became faster, it was no longer necessary, and the world has since gone mostly progressive. Now, back to the individual frame-rate numbers. In the U.S., the standard frame rate for progressive video is 23.976 (p) — commonly referred to as 24p — and 29.97 (i) for interlaced video. As a general rule though, you’ll want to keep your export frame rate the same as what you are editing in. Since we are going to export a progressive video and are located in the U.S., we edited in 23.976 and will be exporting at that frame rate as well for both the Vimeo and archive versions.

3. Codec: Short for coder decoder, a codec is the recipe for how the data in your video is compressed.

This is the real guts of your video export (and as such, you should dig in to this post on common myths surrounding Vimeo’s compression guidelines). It tells your computer how to encode the video, and then similarly, it tells the player (computer, DVD player, etc.) how to decode the video into a usable signal. h.264 is the industry standard when it comes to web codec, and though there are a bunch more options for archival standards, Apple ProRes has become something of the norm. In the case of Apple ProRes, there are multiple codec versions — LT, regular, and HQ — each offering a slightly higher bit rate than the last, and each yielding a higher-quality picture (to a certain extent). For our exports, we’re going to follow those standards. h.264 will be the export codec for our Vimeo version, and for our archival version, we’re going to stick with regular old ProRes codec.

4. Wrapper: A container that tells your computer (or player) what kind of video it is dealing with.

A wrapper is easier to discern than a codec, as it’s reflected in the file extension — .mov, .mp4, .avi, .mpeg, .flv, etc. Wrappers, like codecs, are developed either proprietarily by private companies (like Apple’s QuickTime) or for the general good by consortiums of video engineers (like MPEG, which stands for “Moving Picture Experts Group”), each with roughly the same goal of global domination (meaning, they all want to be the video solution to end all video solutions). Some wrappers automatically dictate the codec, such as .mpeg, however some containers let you use just about whatever codec you’d like, such as QuickTime’s .mov. One thing to note is that codecs and wrappers were generally developed for either editing or delivery. ProRes files are very large in file size and won’t stream on the web, but they are far less compressed than an h.264 .mp4 file, so they play back more easily when editing. ProRes is a proprietary Apple codec and it was designed to go only in the QuickTime container, whereas h.264 is an open codec that can be put into either QuickTime or MP4 containers. For our Vimeo export, we’re going to be using a .mp4 wrapper, since we’re using the h.264 codec. For our ProRes archive version, we’re going to be using the Quicktime .mov wrapper.

5. Bit rate: The amount of data we want to limit per second, measured in megabits (Mbps). With bit rate, you also get to decide if you want to set a constant number throughout the entire video, or let your encoder vary, which is referred to as variable bit rate (VBR). Also, you can set the number of passes your encoder takes. In both cases — constant or VBR — it’s all about letting your computer find efficiencies, which in turn create smaller file sizes. We’re going to set bit rate for our Vimeo export to 5 Mbps, but if you’re a PRO user with enough storage space, we’d recommend uploading a 50 Mbps ProRes archival file. For our 4K archive export, we’ll go with 50 Mbps. In both cases, we’re going to do a VBR with 2-pass export. Here’s where we ended up:

These are the five major considerations in the world of exporting, and each comes with a plethora of options to choose from. Knowing these settings will help keep files optimized for both space and quality, and they’ll keep your films looking realllllll good.

Turns out, there's a big difference between color grading and color correcting in the film world.

How to become a freelance video editor in 2022

We asked the experts, aka actual freelance video editors.

Looking for the best video editing software in 2022? We analyzed 7 options for you

Video editing software can be confusing and costly. Check out our pro/con list of all the major players.