At a recent meetup in Vimeo’s Brooklyn office, we live streamed a 3D hologram in real time using Vimeo Live, and it was awesome.

The popularity of holograms isn’t new, but the interest to make this technology real has reached critical mass over the past year thanks to rising availability of virtual reality and augmented reality headsets (or VR and AR, respectively). Facebook’s 3D photos announcement and other innovative ideas such as the Looking Glass Factory holographic display are proof that holograms are becoming a real thing, even if they’re still in their infancy.

A little over a month ago, I joined Vimeo Creator Labs as a creative technologist, and we immediately started exploring how Vimeo could play a role in shaping the future of volumetric content for creators. (When you think volumetric, think 3D video.)

Last month we also co-hosted a Volumetric Filmmaking meetup in our Brooklyn office with Scatter (which you can read about on our Vimeo blog), and we wanted to demo something original. While I personally have been exploring volumetric video for some time now, we thought that leveraging Vimeo’s API and transcoding capabilities would be a good demonstration of how we can make volumetric video more accessible and easier to deliver. We wanted to take advantage of everything that Vimeo provides, which brings us to the question that we asked ourselves. Can we live stream a 3D hologram of the presenter in real time?

(The answer is yes.)

Luckily, last year we released our live streaming product and also acquired Livestream, which means we get to work with some of the brightest minds in the live streaming world. But before I dive into the actual tech, let’s explore some of pop-culture ideas that informed and inspired our thinking along the way.

Our conception of holograms and holographic imagery owes a huge debt to science fiction. Remember Princess Leia’s plea to Obi-Wan Kenobi back in the original Star Wars movie?

A GIF of Princess Leia’s hologram from Star Wars

Thematically, it seems the two dominant areas featuring holographic imagery in science fiction have been centered around:

If you watched Black Panther, you must have wondered, “When will I get that Kimoyo Beads  hologram thingy?” Well, the honest answer is very soon. Minus the beads and magical dust.

Outside virtual, augmented, and mixed reality headsets, another big milestone for the adoption of holograms was the rise in popularity of projection-based holograms. While the topic of projected holograms is juicy enough for a post of its own (comment if you’re interested in reading one), I’d like just briefly to mention a few. Hatsune Miku, a Japanese pop star, was one of the first to create an anime-inspired character as the persona of the lead singer and project a hologram of “her” performing on stage.

A live-performance hologram of Miku

Following Miku’s on-stage holograms, which started more than eight years ago, we’ve seen a rise in popular acts incorporating similar techniques. From Tupac’s hologram performance in Coachella to the Gorillaz concerts entirely dominated by the animated-character holograms on stage, it’s becoming increasingly likely that you’ll go to a concert to see a performance, only to discover a hologram projected on stage.

From the content creation side, capturing human holograms is a task that usually involves one of two popular techniques:

While these techniques continue to evolve, the rise of machine learning is also becoming an important player in the field of creating holograms. Research is continuously being published around the idea of inferring depth from color images and reconstructing 3D models, which could give us holograms from any 2D video. By using a special type of machine learning architecture known as convolutional neural networks, an algorithm is able to learn the correlation between sets of two images — color and depth — and upon successful training, predict the depth by itself, from any 2D image or video. If you are interested in the math behind the idea, you can read more about it here.

For example, the research done at the University of Washington trained such convolutional neural network to be able to reconstruct 3D holograms of soccer players from any 2D video of a soccer match. Check out this talk by one of the researchers if you are interested in learning more.

All these examples and techniques share an underlying idea: of presence, and more specifically, of human presence. And while I’ve been exploring these themes for quite some time now, the idea of live presence, of knowing something represented in virtual 3D space is actually happening right now somewhere else, always seemed to be the place that this is heading towards. Let’s call it telepresence.

To live stream 3D information, we must capture and store that 3D information. At first glance, it looks like a difficult problem, but the solution turns out to be quite simple. If you convert depth data into color, what you end up with is a representation that looks similar to thermal imaging. Since it’s just color, we can encode that into a video format. If you combine the color data with the original RGB data, you end up with a video that looks like the GIF below.

So how do you actually do it? First, you need a Vimeo Live membership, which we’ll be happy to help you with if you don’t already have one.

You also need a device capable of capturing depth from the real world. While there quite a few options (such as Kinect v2, ZED, Orbec, Intel RealSense, Structure, and even the new iPhoneX TrueDepth sensor), our goal was to choose one that is cheap, accessible, and reliable across platforms, so we picked Intel’s new RealSense D415. It costs about $100, it’s USB-powered, and it works on all platforms. Unfortunately, it isn’t perfect. The depth data that you get contains a lot of noise, but we were able to build an application to capture, filter, and prepare the volumetric video for streaming to Vimeo.

The result is the open-source  Vimeo Depth Viewer, currently available as a prebuilt macOS application. (If you’re interested in diving into the source code yourself, you could build it for Windows and Linux as well.) The app features a full GUI for interacting easily with the RealSense depth camera.

Connect your camera, start the application, and click the play button. If everything is configured correctly, you see the stream coming in from the camera. Adjust the distance that the camera clips (to isolate from the background the person who you’re live streaming) by changing the value in the Clipping panel.

Next, open the full resolution monitor. This is the window that you live stream from.

A demonstration of the Vimeo Depth Viewer

We didn’t want to spend any time building our own live encoder into this app, so we decided to use OBS, or Open Broadcaster Software. OBS is a free and open-source application that enables you to broadcast a live stream from your computer.

Through OBS, you can capture the full resolution monitor from the Vimeo Depth Viewer and stream it to Vimeo Live.

While logged-in, you’ll see the Create live event button on the left-hand side

A message appears, stating that your event hasn’t started yet. Click Next at the bottom, and then choose Show RTMP URL & Stream key to get a screen like this: 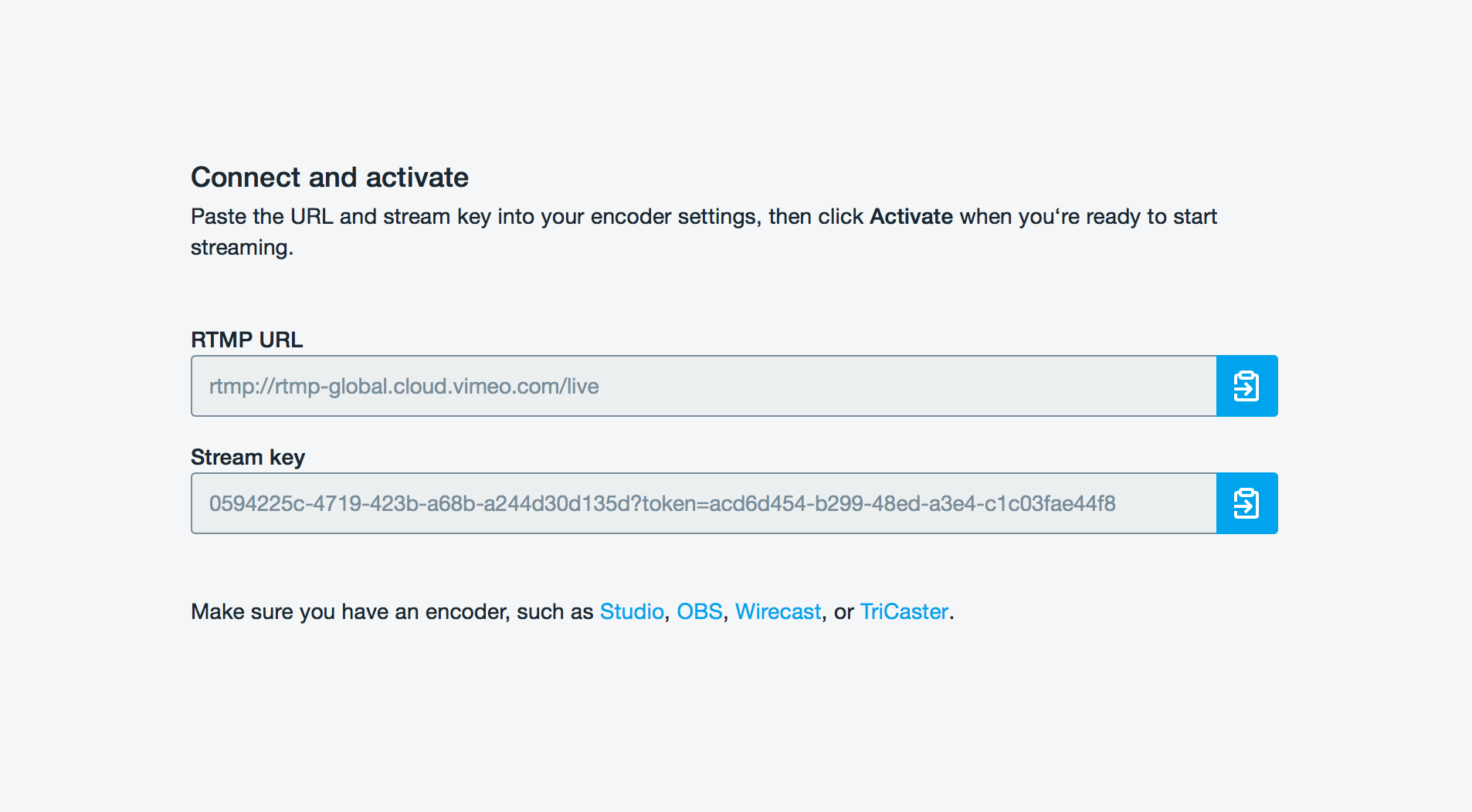 A preview of the RTMP URL & Stream key on Vimeo.com

Assuming that everything went well, you’re now, at this moment, live streaming volumetric video to Vimeo Live. Look at you go! Congratulations!

That’s exciting, but it’s still only half of the story. Now you need to build a web application that can ingest the live stream and render it into a 3D hologram. To do that, and do it easily, we built an open-source WebVR player called Vimeo Depth Player. You can find the code needed to run the 3D web renderer on GitHub, and, for easing the process, we created Glitch examples for you to remix and call your own. Go to our (now archived) live stream demo, open the options, and click Remix on Glitch to create your copy. Then go to Glitch to remix the demo into your own example.

The first step is to generate your own Vimeo token to identify your account when you request a video stream from the Vimeo API. Generate the token, and then copy it and paste it into the .env file in the example that you remixed above.

Preview of the .env file in your Glitch project

Next open the public/client.js file from the Glitch file browser, and swap line 43 with your Vimeo video ID of the live feed. You can find this value in the URL for any Vimeo video.

Paste the ID into Glitch at line 43 in the part that says new Vimeo.DepthPlayer(‘id_goes_here’)). 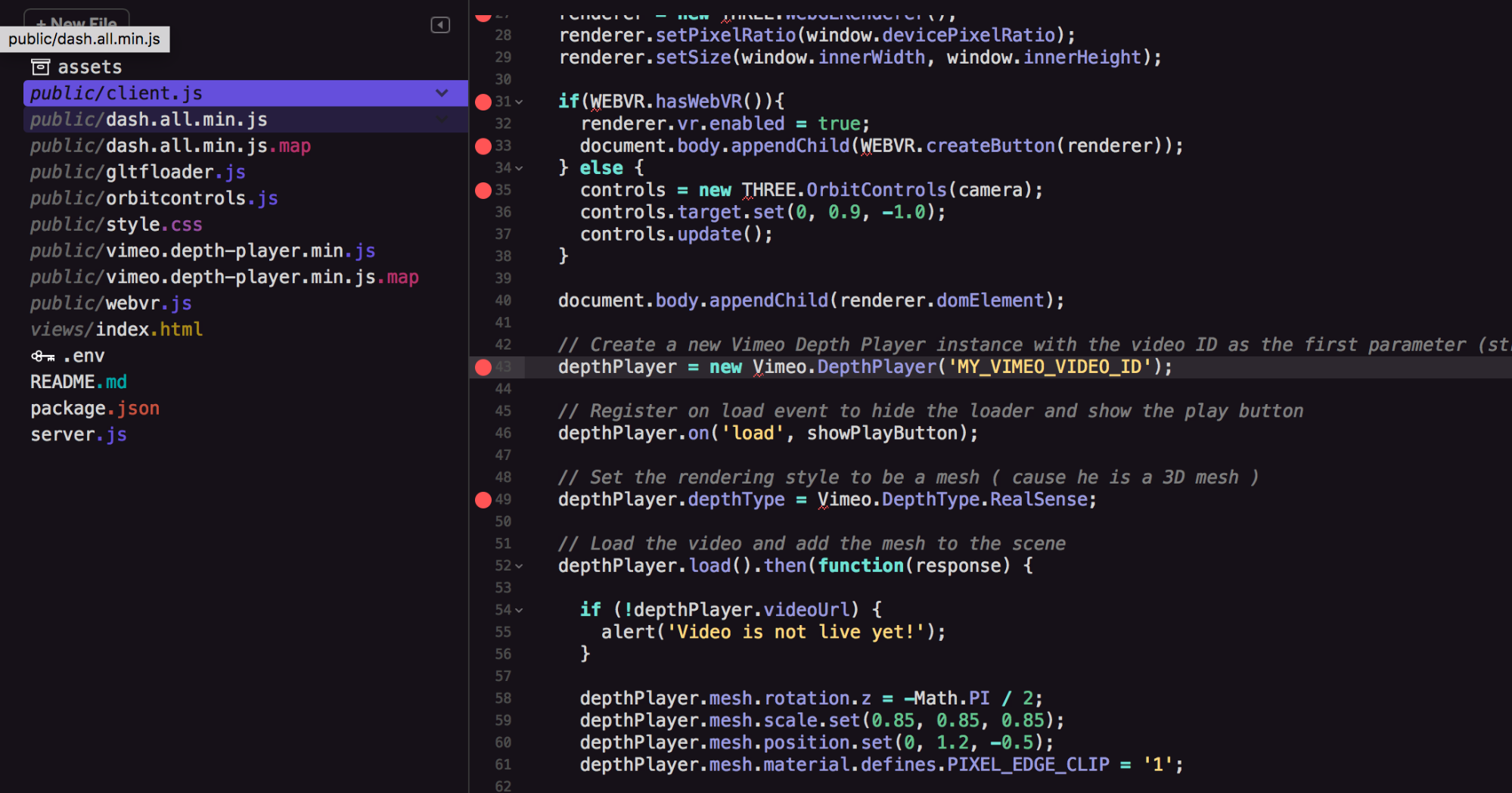 Preview of the public/client.js file in the Glitch editor

As soon as you paste your ID, Glitch will automatically update your website.  You are now live streaming volumetric video over Vimeo Live into any browser or VR headset. And, you know, making history.

A volumetric live stream of Casey

So now that volumetric live streaming is possible, what can you do with it? A telepresence virtual reality experience? An augmented reality concert? A mixed reality news broadcast?

Who is this made for?

Well, everyone. We’re aware that costs are involved to acquire a depth camera and a Vimeo Live account, so the technology isn’t free. But the affordability of volumetric video isn’t out of the reach for many for whom it holds the most exciting possibilities: creators, artists, broadcasters, musicians, and many more who will invent the next-generation use cases to push video beyond its 2D status quo. Since this is a nascent field, by sharing our experiments, code, and the things that we learn, we can actually understand more about what people find interesting or appealing about using volumetric video in their creative projects.

I also learned that, while this field is maturing, it lacks creative, creator-facing tools that would make it easier for people to adopt these technologies for their own films and interactive experiences. In short, it lacks a sense of accessibility and inclusion. This experiment is a part of our ongoing work to make volumetric video more accessible, which you can learn more about in this talk by Casey Pugh, head of Creator Labs at the Volumetric Filmmaking meetup.

Wanna stay in the loop? Sign up for our mailing list to hear (sparingly) from three-dimensional humans about how Creator Labs is empowering the next-generation of creators.

Or is a creative technologist, interested in computer graphics, machine learning and immersive experiences.

Up next in Video School

How to write great social media copy for your video

Writing effective social media copy doesn't need to be complicated. Check out our 4 easy tips to maximize social reach and engagement on your next video.

How to make a Vimeo Create video

Vimeo Create gives you all the tools to make a polished video in no time flat. Here's how.

6 tips to help you find your next gig

Filmmakers share their tips to help you get hired on your next video project.