It's no secret that 360 video is an evolving medium — whether it's new cameras and gear hitting the market, or better ways to watch and immerse yourself in the story. These constant improvements are 1) insanely awesome, but also 2) kinda complicated sometimes! Now that you can upload gorgeous 360 videos to Vimeo, we wanted to breakdown some of that complicated-ness into one helpful resource.

Below, we've compiled a list of key 360 concepts for uploading and streaming on Vimeo: from terms our community has asked about, to nitty gritty technical details, to things that have scary-sounding names but are actually not so scary upon examination. Whether you've been kinda intimidated by 360, or are a pro who just wants a refresher, we invite you to kick back, boost your foundation, and start uploading your own stories. 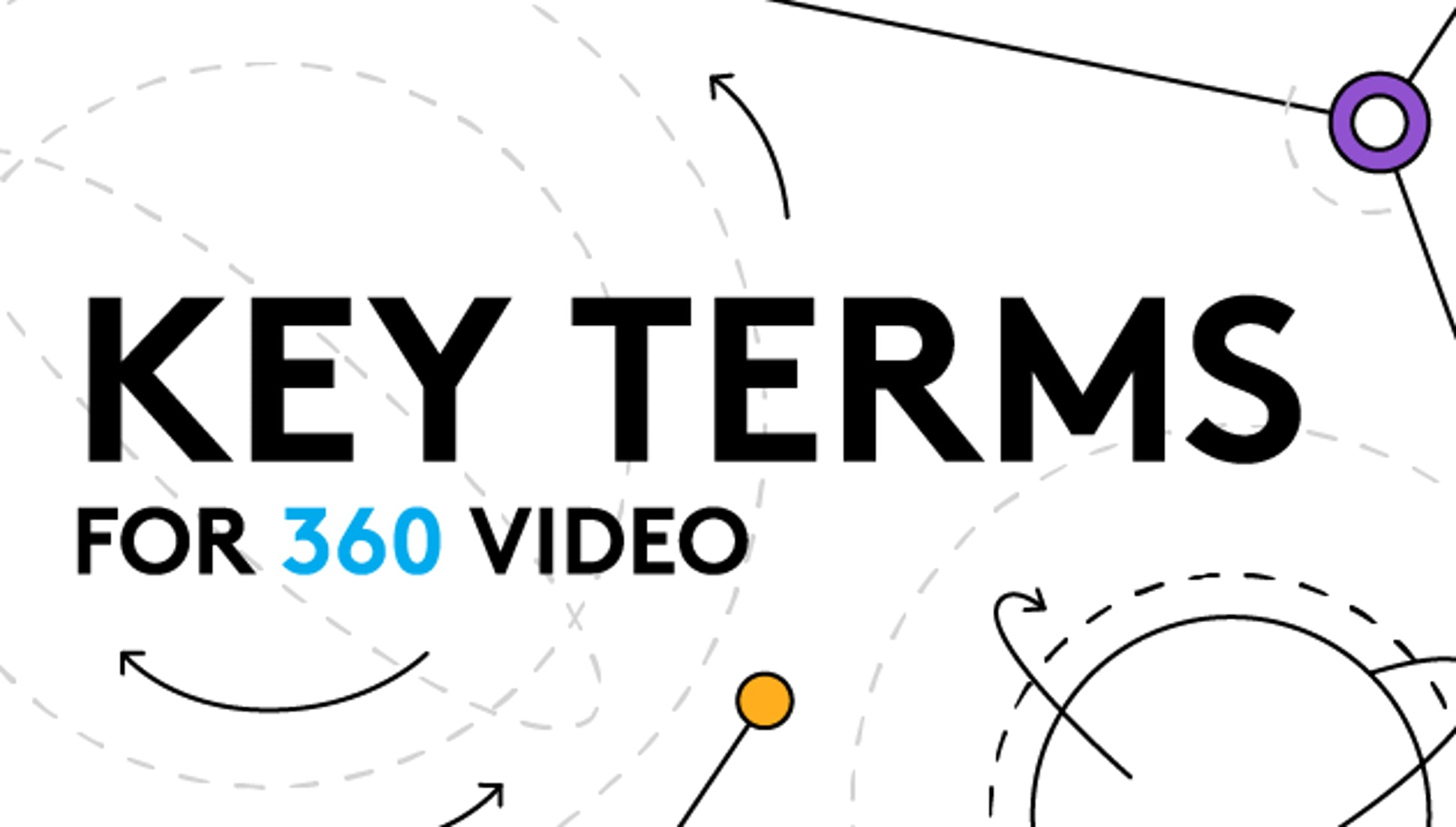 360 Video: Starting with this one seems important! 360 video is video that's recorded from all angles using a special rig of multiple cameras, or one camera with multiple lenses. The viewer can navigate around based on their central point in space, dictated by the camera.

Virtual Reality (VR): This refers to a simulated digital environment in which a viewer can move in all directions as well as interact using equipment such as a headset and body gear. Most often, this format is used in gaming or simulated experiences (like flight simulation). Viewers move in all directions, pick up objects, and even influence the storyline. Stereoscopic 360 video is considered VR by many, but it is *technically* a different experience.

Augmented Reality (AR): Pokemon Go is one of the best examples of AR: a real-world environment combined with digital elements (such as computer-generated sound and images). The main idea is to enhance reality, as opposed to immersing you within a completely digitized environment.

Monoscopic 360 video: This is the most common type of 360 video. Why? These videos are recorded with one camera from one single point of view, which makes them easier (and usually more cost-effective) to record and edit. All footage is then stitched together in post to create one video with one image. On Vimeo, you can enjoy these videos on a screen or in a headset — whatever setup is best for you (more on that in a hot second).

Stereoscopic 360 video: This is the “3D” type of 360 video. Two videos are recorded side by side — with a separate recording mapped to each eye. By offsetting the images, the viewer can get a feeling of 3D, which is also used in those fancy blockbuster films. When viewed in a headset, stereoscopic videos allow you to  experience the depth and spatial awareness of a 360 environment.

It may be helpful to think of the differences between mono and stereo audio. Mono audio uses one channel, stereo uses two; monoscopic is one image, and stereoscopic is more than one.

While you're uploading a video on Vimeo, you have the option to select monoscopic or stereoscopic (top/bottom layout) based on your video source type — and that'll help us render everything just as you intended.

Monoscopic and stereoscopic playback: To make things more complicated, these terms can be applied to your viewing experience as well. On Vimeo, we optimize everything based on the viewer's setup: so, a stereoscopic source can be viewed in a monoscopic setting (out of a headset), and monoscopic videos can be viewed in a stereoscopic setting (or, in a headset). If it's the latter, for example, you'll be lacking the depth perception that a true stereoscopic source can provide —but we'll render everything in the highest quality possible for whatever setup a viewing is using.

Stereoscopic layout: This refers to the image positioning of stereoscopic 360 video. Picture two separate recordings populating one single video file, either stacked on top of each other (top/bottom) or side by side (left/right). These images are then rendered by the player for stereoscopic viewing within a headset. We support top/bottom layouts on Vimeo, as these are by far the most common types of stereoscopic 360.

Here is an example of a top/bottom layout. Note that two videos layer on top of one another within the same video. 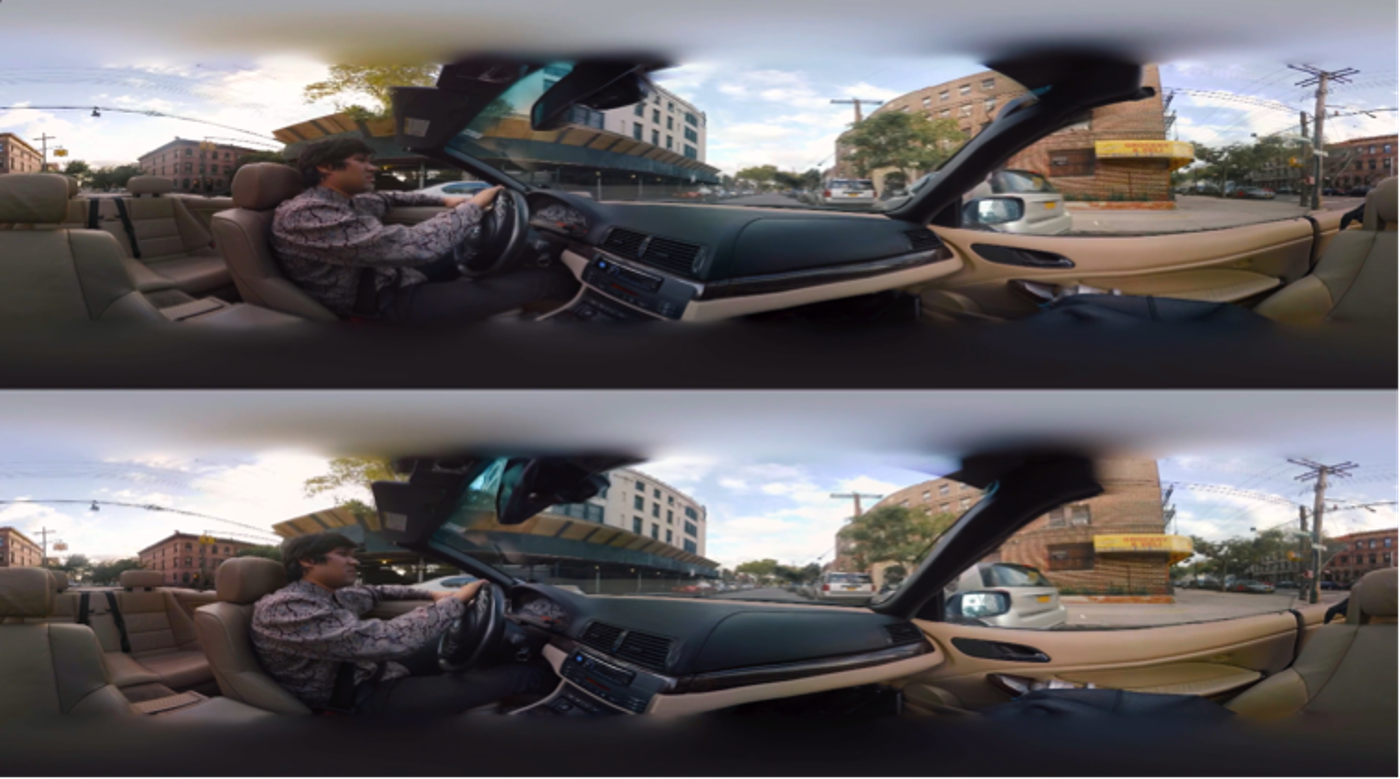 The left/right layout is just the opposite, with both images placed side to side.

Mobile headset: This one is a bit more self-explanatory: it's a headset that requires a smartphone in order to watch 360 videos. When looking inside the headset, you will see two lenses, one for each eye. The phone is placed at an optimal distance from the lense to provide a 3D-like viewing experience. You can think of Google Cardboard, Google Daydream, and Samsung Gear VR.

VR headset: While these headsets may look the same as mobile ones, don't be fooled! They require more processing power than a mobile phone and are often connected to a gaming console or computer. Oculus Rift, HTC Vive, and Playstation VR are all 1) awesome and 2) examples of true VR headsets.

Stitching: This is the act of combining all the pieces of footage from a 360 camera or rig to create one complete image or video file in post-production. The idea is to mesh all video files together to allow for seamless playback from all angles.

Spatial audio:  Spatial audio is used to replicate the way sound is experienced in a real-life environment. As you move around the video, spatial audio will adjust accordingly (volume, sound effects, etc). For now, Vimeo only supports mono and stereo audio — but we've got our eye on additional audio types for the future.

360 projection types: Envision your video being shot as a sphere in your camera. In order to edit the footage, you will need to flatten the image. That's where the projection type comes in. A set of mapping coordinates are associated with your video, which allows the payer to render your video back to 360.

Equirectangular: We support equirectangular projection, as this is the most common projection type for 360 video. The source file will resemble a sphere flattened down to 2D rectangle. The Vimeo player then renders the video back into a sphere using the spherical coordinates. If this sounds kinda abstract, think of the relationship between a flat world map in a classroom and a globe. Or check this image:

Field of View (FOV): This is the portion of video that is visible by the viewer at any given point. It's similar to a zoom effect without technically magnifying your video. In a 360 video, this would limit the degree of video that is visible as you move around. Creators can choose their field of view on the brand-new “Advanced 360 settings” page, which you can get to from your Video file settings.

This image outlines how adjusting your field of view can cause a different image to display in the player.

Roll, Pitch, Yaw: These terms describes the rotation of a video: the front-back, side-side, and vertical axis, respectively. These terms were originally introduced for airplane control, and are now also used to set the positioning of a 360 video. Roll describes the rotation around the vertical axis (such as an airplane doing a barrel roll in the sky), which does not apply to 360 video in most places. Pitch tilts up or down, while yaw moves from side to side, and on Vimeo, you can set both exactly as you see fit in your “Advanced 360 settings.”

Default orientation: These are the coordinates that determines the exact direction in space that your video starts, and are determined by settings the values for your pitch and yaw. Viewers can return to this position at any point in the video by tapping the compass.

Compass: Compass, luckily, is what it sounds like. This appears in the player to show the direction you are currently facing, and is sometimes referred to as a gyroscope. Creators have the option to turn this on or off from their Embed settings.

360 Cameras: 360 cameras range in price and quality, but all are built to record a multidirectional view using a set of lenses built into the camera: some well-known examples are the Nokia Ozo, Ricoh Theta, and Kodak PixPro.

Phew! It's tough to know when a glossary is too short, too long, or just right (the world of 360 is even more complex than porridge) — but if you master all the terms above, you'll be well-poised to take on your next 360 video. We'll be adding more and more resources into 360 Video School, but if you've got any more 360 concepts or terms keeping you up at night, do share them below! We'll do our best to tackle them and demystify all the things.

Up next in Pre-production

Making a film? Here’s why you need a shot list (plus a free template!)

So you've written a script! Awesome! Now it's time to turn that script into a film. Here's how to create a shot list.

Here's exactly how to license music for marketing videos, plus helpful music resources 🎶

Finding music you can use legally in your video can seem like a daunting task. We’re highlighting music resources that make the process easier.

6 tips to help you find your next gig

Filmmakers share their tips to help you get hired on your next video project.